OBAMA IS POPULAR BECAUSE HE MAKES HIS FOLLOWERS FEEL GOOD

Why is he doing so well? 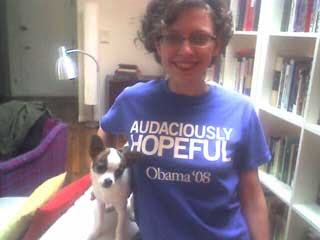 He's connecting with a large segment of the electorate.

It's all about them.

It's always all about them, and how they feel.

It's not about experience. 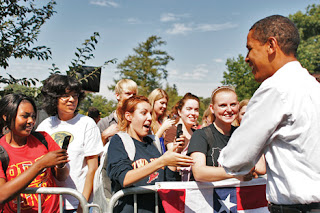 It's not about values.

It's not about Iraq.

It's not about Bush - or Hillary. 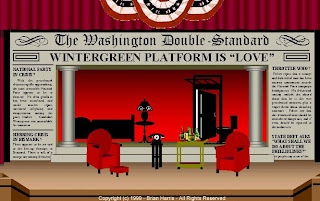 Which reminds me... Obama's feel-good campaign-theme "the audacity of hope" is very much like another campaign theme - a fictional one, from the Pulitzer Prize-winning musical by the Gershwins: OF THEE I SING.

The presidential candidate and leading role in the musical, John Wintergreen, ran on a campaign theme of "LOVE." 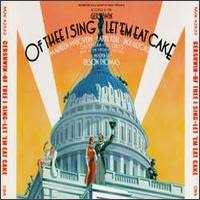 (I wish people saw Obama's paucity of experience and his paucity of honesty. I hope once the REAL election campaign start they do)

I guess I'm in the minority then. On my blog I've been rationalizing my support for Obama in a multi-part series on the issues, trying to see past the "hope" and "change" rhetoric.

The Repubs are doing the same thing though. I can't think of any explanation for the frequency other than perhaps conservatives get half a chub every time Reagan is mentioned.

MCCAIN WAS HELD IN CAPTIVITY FOR LONGER THAN OBAMARAMATINTINTIN HAS SERVED IN THE SENATE.

IF OBAMA IS QUALIFIED TO BE POTUS, THEN SO IS THE AUDACIOUS PIMPLE ON YOUR ASS.

WELL SITTING IN A CELL CERTAINLY QUALIFIES YOU FOR LEADER OF THE FREE WORLD. EXCELLENT POINT YOU ASTUTE DEVIL.

One of my former students now in college heard Obama speak early last year, before it was obvious that he was making the run for the nomination. This former student of mine is one smart young man and not a feel-good voter. But he also told me something like the following: "If Obama runs for President, he's going to be hard to defeat. He makes his listeners feel powerful. I was almost drawn in."

In effect, Obama is the leader of a populist movement. He's going to be hard to defeat. Also, I think that many will vote for him to prove to themselves that they are not racists.

And take a look at Obama's logo. Is that a moon rising? Every time I see his logo, I am reminded of CCR's "I See A Bad Moon Rising."

Obama MAY be defeatable if he is swiftboated. But because he's the media darling, it's going to be tough to get out any such information. Plus, he was smart enough to "bare all" in his books, both of which I read.

He's the essence of the "Kumbaya" candidate.

Whenever we use the term "swiftboating," let's remember that it really means exposing the lies and treacheries of smug, self-satisfied leftists with the clear light of truth!

But Kerry was whacked by the TRUTH; the swifties told the truth; kerry has still not released his military file.

if we do swiftboat obama it means we will find out something TRUE and DAMNING and we will relentlessly use it to smash him for the good of the USA and Free World.