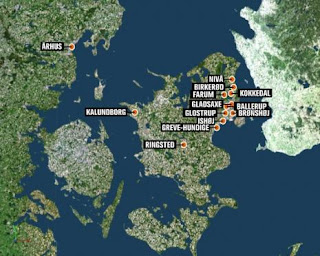 The map at left borrowed from TV2.dk

The nightly skirmishes of arson and vandalism are beginning to be noted outside of Denmark, but unless blood is shed it may not make it to the MSM.

Unless the gorvernment imposes a curfew, or ordinary citizens come out of their nests I do not see this subsiding.

One Copenhagen mayor suggested the government provide a center for these youths to hang out at so they would be off the streets (I guess they would have to build 20 centers across the country now...)

But Integration Consultant Mohammed Rafiq said the proposal was unrealistic: "The commune would lose control of this place and it would become a market for drugs and stolen goods."

And such a place would not encourage integration, as no ethnic danes would hang out there!

There are a lot of theories being proffered as to why this is occurring now: The arrest of 3 men plotting to kill one of the artists behind on of the famous Muhammad Cartoons - and the republication of said cartoons in the aftermath of these arrests; the hard handed treatment by the police of a Palestinian man in Norrebro; stepped up pressure on the part of the police against the drug dealing Islamothugs...

My own reading of the situation is that this is an attempt by the drug-dealing Islamo-thugs to overburden the state and raise the price for domestic tranquility. Everything else is just oil on the fire.

RELIAPUNDIT ADDS: IMHO: THE BREADTH OF THE ATTACKS PROVES THIS IS A COORDINATED NATIONAL EFFORT - IDEOLOGICAL IN ITS MOTIVATION; IN SHORT IT IS A MUSLIM INTIFADA INTENDED TO MAKE DANES AFRAID FOR THEIR LIVES AND PROPERTY AND READY TO REDUCE THEIR LIBERTY.
Posted by northern seer at 3:17 AM