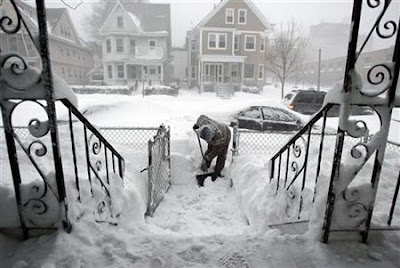 New England dug out on Friday from a record-setting storm that dumped 10 inches of snow on Boston, more than the city typically sees in the entire month of December.

...More than 400 flights were canceled at Boston Logan International Airport.

The National Weather Service said the region could expect another blast over the weekend, when a second storm is expected to drop 6 inches of snow and sleet starting on Saturday evening.

"It is a powerful Northeaster," said Charlie Foley, a meteorologist at the National Weather Service in Taunton, Massachusetts. "The difference in this storm is that it is going to occur during the overnight hours and on the weekend, so we wouldn't expect it to have the impact that this thing yesterday did.

Thursday's snowfall set a new one-day record for December 13, and was more than the 7.8 inches that typically falls during the entire month of December.

AS WE KNOW, EUROPE IS ALSO HAVING RECORD-SMASHING SNOWFALL, THE MOST IN 56 YEARS.

THIS IS HARDLY THE STUFF CATASTROPHIC GLOBAL WARMING IS MADE OF.
YES: THAT'S WHY THEIR EFFORTS ARE REALLY SO URGENT:

THEY KNOW WE'RE HEADING OUT OF A WARMISH PHASE AND HEADING INTO A COLDER PHASE - THEY ARE DESPERATE TO PASS THEIR LEFTIST GLOBAL TAX HIKES AND REGULATIONS SO THEY CAN TAKE CREDIT.
Posted by Reliapundit at 10:21 AM