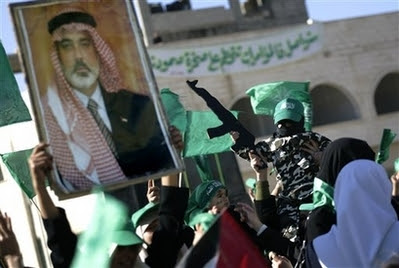 Hamas threatened to launch a new uprising against Israel on Saturday when hundreds of thousands of Islamist supporters rallied in Gaza City to mark the group's 20th anniversary.

"Our people are capable of launching a third and a fourth intifada until the dawn of victory rises up," said Khaled Meshaal, the group's exiled leader, in a speech recorded on Friday at his base in Damascus.

The central square in Gaza City was awash with green flags and dozens of armed, masked men from the group's military wing patrolled in a crowd estimated at between 300,000 and 500,000.

Hamas leader in Gaza, Ismail Haniyeh, said the movement was growing more popular because of its stance against the United States and Israel.

"Today is the day of Jihad, resistance and uprising," Haniyeh said. "Those who remain committed to the constant rights of their people, those who make an enemy of America and the Zionist occupation (Israel) gain popularity. This is Hamas."

IT'S DHIMMITUDE - APPEASEMENT, AND IT WILL WORK AS WELL NO AS IT DID IN THE 1930'S.
PITY. HAD HITLER BEEN STOPPED IN THE 1930'S, THEN 100 MILLION MIGHT HAVE BEEN SAVED IN EUROPE, RUSSIA AND CHINA IN THE BALANCE OF THE CENTURY.

OUR RELUCTANCE WILL HAVE SIMILAR RESULTS; WE ARE NOT ONLY DELAYING THE INEVITABLE, WE ARE GUARANTEEING IT WILL BE WORSE AND COST MORE LIVES.
Posted by Reliapundit at 9:57 AM