A Compassionate View of Illegal Immigration?

All my life I have prided myself as a reasonable and compassionate person - and someone with sympathy for the plight of immigrants. That has all gone out the window in recent years, as the number of illegals and the crimes they commit has become an obscenity, compounded by the obvious attempts by illegals to make over the United States into some kind of Mexican tributary, where Spanish is the "official" language, and the tax receipts from citizens support their lifestyle.

I have lost all sense of compassion and reason; I want it stopped, and I have no compassion left for the children or any other unfortunate victims of this whole disaster. It's just too bad. Build the fence; shut down the illegal entries; raid the businesses employing them, and when we stumble on them, ship them out. Then, when we have reestablished our sovereignty and our control over our own borders, I will be in a mood to listen to plans for temporary workers' permits and some way to earn legal citizenship. Until then Mr. Huckabee can just go jump in a lake.

By Stephen Dinan - Groups that support a crackdown on illegal aliens haven't settled on their champion in the race for the White House, but there's little doubt which Republican scares them most — former Arkansas Gov. Mike Huckabee.

"He was an absolute disaster on immigration as governor," said Roy Beck, president of NumbersUSA, a group that played a major role in rallying the phone calls that helped defeat this year's Senate immigration bill. "Every time there was any enforcement in his state, he took the side of the illegal aliens." 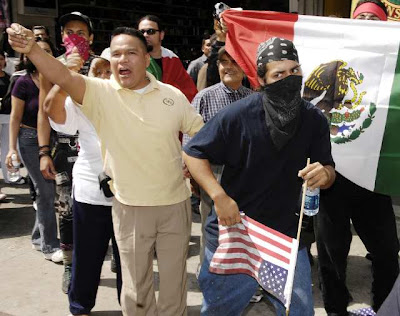 As Mr. Huckabee rises in the polls, his opponents are beginning to take shots at him on immigration. Just as problematic for the former Arkansas governor, however, is that the independent interest groups that track the issue are also giving him the once-over, and don't like what they see.

"Huckabee is the guy who scares the heck out of me," said Peter Gadiel, president of 9-11 Families for a Secure America, a group instrumental in fighting for the REAL ID Act that sets federal standards for driver's licenses.

Some leaders said Mr. Huckabee reminds them of President Bush, who pushed for legalization of illegal aliens and a new supply of foreign guest workers, despite his base calling for better border security and enforcement.

"I would say that Huckabee comes from the same perspective on the issue that George W. Bush came from — that out of a strong sense of compassion, he tries to identify with someone who comes to the United States, even if they came illegally," said Steven A. Camarota, research director for the Center for Immigration Studies.

Mr. Huckabee yesterday defended his record, but he said if voters are looking for the toughest guy, he's not their man.

"Is my answer satisfactory to all the Republicans? The answer's 'no.' " he said. "Some people want me to be a lot harsher. I think my answer is the honest and the right one."

The former governor said the borders should be secured and said he opposes sanctuary cities shielding illegal aliens and opposes amnesty, though he does think illegal aliens can be put on a path to citizenship — something many conservatives equate to amnesty.

But he said he finds a lot of anger and frustration directed at immigrants who don't speak English.

"Unfortunately, instead of being angry at the federal government for totally failing us in this, they sometimes get angry at the people themselves," he said.

He also said he's willing to take the heat for pushing for illegal alien students to be able to get taxpayer-funded financial aid and college scholarships.

Mr. Huckabee said he will produce a full plan to address illegal entry at some point, and he said he hasn't worked out specifics yet for who would get a path to citizenship and how. 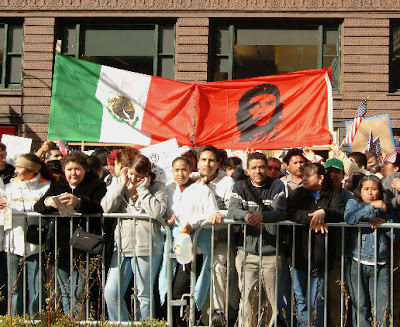 As Mr. Huckabee's campaign gains attention — he is polling in first place in Iowa, the site of the first nominating contest — his immigration stance is getting a closer look. Fellow candidate Mitt Romney questioned him about his financial aid plan during Wednesday night's debate, and the video of that made the rounds of the immigration-control groups yesterday.

None of the groups has endorsed any candidates in the Democratic or Republican races, and they are divided on who the best candidate is.

On Thanksgiving, Mr. Beck wrote an e-mail to his supporters praising the immigration plan of Fred Thompson, a former senator who is running for the Republican nomination and who has called for attrition through enforcement.

"I really was blown away. I said, my gosh, this is an incredible platform," Mr. Beck said in an interview this week.

James J. Boulet Jr., executive director of English First, which wants to make English the official language of the government, said Mr. Romney had the best official record on that issue, opposing bilingual education during his term as Massachusetts governor.

"The fact that he has OK'd these positions on such a volatile topic shows he really takes voters' concerns seriously and he believes there ought to be more than just sound bites about it," Mr. Beck said.

Reps. Ron Paul of Texas, Tom Tancredo of Colorado and Duncan Hunter of California all win near universal praise from the group leaders, but the leaders question whether any of the three have a shot at winning the nomination. Most of the leaders dismissed Arizona Sen. John McCain, a longtime advocate of legalizing illegal aliens, saying he appears to have little shot of winning the nomination.

As for Rudolph W. Giuliani, several leaders said his record as New York mayor was worrisome — he ran a sanctuary city, which means the identity of illegal aliens was kept from authorities in some cases — but they are impressed with his tough border-security position.

i feel the same way.
MOST American do, too.

Illegal immigration is the NUMBER ONE ISSUE.

the number 2 issue is EXPANDING ENERGY SOURCING - thru more nuclear power plants, more coal burning power plants AND MORE EXPLORATION IN ANWR, and off the coasts of CA AND FL.

more US sourcing will increase supplies and lower costs and decreases our dependency on the Arabs.

Tom Tancredo, Duncan Hunter, and Ron Paul must address the CFR Divide and make the voters familiar with the divide between the interests, will, and views of most Americans as opposed to the imposed candidates on the American people by the ruling elite and the positions espoused on the organization and forum through which the elite forms and expresses its positions.

This elite is represented by, and its forum is the Council on Foreign Relations (CFR).

The CFR Divide consists of: 1. the elites insistence upon free trade instead of fair trade which is in the interest of most Americans. This leads to the wholesale dismantling of entire industries in this country and the undermining of the livelihooods of millions of Americans unnecessarily to allow international business to exploit near slave class and other much cheaper, even intellectual labor such as in India and China, 2. the elites support for as much immigration as possible, both legal and illegal, despite its high cost in infrastructure, water and other limited resources, taxes, educational achievement, health care, our common culture, and middle class way of life, 3. their support for birth right citizenship for anchor babies which makes deciding the future fate of the US impossible by its lawful citizens, and 3. the undermining of sovereignty by the continued push for these things and a secret but transparent attempt to merge the US, Mexico, and Canada through the Security and Prosperity Partnership.

This idea for "Building a North American Community" was created within and by the Council on Foreign Relations. Google and read it. Then send money and support Tom Tancredo and/ or Duncan Hunter for president.

I have a major immigration case that I would love to talk to the U.S. about. I am a U.S. citizen and have legally married an illegal immigrant. Supposedly marrying a U.S. citizen is the 99% way to do it right. Wrong! Not anymore. We have an 18 month old son and for the past 3 years havebeen trying our hardest to get my husband legal the right way. Alot of money has been spent and our hearts constantly broken. My husband is not a felon hasa very clean record has never even tried drugs doesn't even drink.He is very honest,except coming here illegally. Who doesn't?
In 2006, I was 7 months pregnant and had a k3 visa appointment in JUAREZ MEXICO. He was banned from the US because the NationalVisa Center did not have enough time to send the approval from the US to Juarez, so my husband basically did not exist. Can yoyu believe banned from the US for 10 YEARS without a waiver?! They cannot take the waiver from my husband because he is the conditional spouse of a US citizen. But they did. I do notwant to say tomuch here I would rather talk to the press,politicians,all the big frys I can. I even have filed a FEDERAL COURT CASE AGAINST OUR FEDERAL GOVERNMENT FOR ABUSE OF AUTHORITY. On 04/07/2008 we had another interview this time for k3 and residency at the sametime. It was for a reconsideration of the case. The consulate got mad at my husband for going to the bathroom and got really nasty and snotty and went ahead and gave him 10 years again without a waiver becasue he stayed in the US formorwe than 1 year at a time and re entered again. I understand that is the law, but he is legally my husband and the havetogive him a waiver. How can they expect us to be separate forthenext 10 YEARS? He has only seen the baby in pictures. They give visas to gangsters and drug dealers before family men.I have honest information on one 19 year old boy married toa US citizen.Same day he was given a visa with a waiver. He told us he entered the US illegally, in and out of jailfor drug dealing and beating his wife, and then even had awarrant out for his arrest recently. The consulate said he only got the waiver because it is illegal to deny a waiver to anyone who is the spouse of a US citizen. He even rode the same plane to Guadalajara Mexico with my husband.Another case, a woman wasin the US for 4 years married to a US citizen 2 kids. In 30 days her waiver will go through and she will get her visa and go home. I have more to say.
If anyone can help me get my story out tothe right people, even the public please email me at misslauralynn20@yahoo.com
Thank you