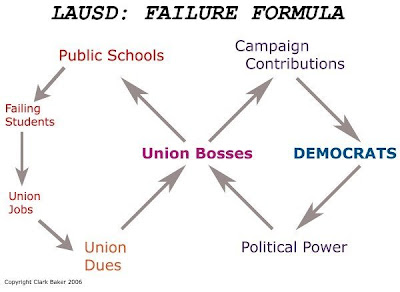 Due to the interference of Los Angeles' school unions, a horror is emerging in the city's schools which is verging on violent anarchy and complete chaos. And it's not as if they aren't well-funded. But what are they doing with the huge sums of money flowing into their coffers?

Ex-Liberal in Hollywood describes what he terms a "criminal enterprise" of startling proportions: the Los Angeles Unified School District (LAUSD). According to Baker, LAUSD has a total budget of $32 billion, which dwarfs the city of LA's $6.5 billion annual budget.

But the worst part of this story comes from a first hand report by a substitute teacher who spent time in the school system.

Migdia Chinea is a former Los Angeles Unified School District (LAUSD) substitute teacher. Her description of the LA public school system is terrifying on several levels: that such a system exists in the first place; and that the mainstream media has basically ignored the catastrophe.

"There's no teaching going on at LAUSD – only confinement of the sort one may find in a penal colony, complete with walkie-talkie-carrying wardens and bullhorns. And I have "confined" at many different schools within central Los Angeles in the last six months. Many students scream "suuuuuuuub" when they see someone like me – a "guest teacher" – in their classroom" (Chinea says)

She has been "brutally assaulted, burglarized, and repeatedly injured" as a teacher.

'Baker pins the problem on a powerful teacher's union that represents a monstrous funding arm for the state Democratic Party; and a state Attorney General enjoying a steady stream of related funding since the seventies.'

Unions are an insidious, wealth-devouring, pernicious evil which destroy everything they touch. Time for an overhaul.