THE LAW OF SUPPLY AND DEMAND APPLIES TO OIL

With oil prices approaching the symbolic threshold of $100 a barrel, the world is headed toward its third energy shock in a generation. But today’s surge is fundamentally different from the previous oil crises, with broad and longer-lasting global implications.

Just as in the energy crises of the 1970s and ’80s, today’s high prices are causing anxiety and pain for consumers, and igniting wider fears about the impact on the economy.

Unlike past oil shocks, which were caused by sudden interruptions in exports from the Middle East, this time prices have been rising steadily as demand for gasoline grows in developed countries, as hundreds of millions of Chinese and Indians climb out of poverty and as other developing economies grow at a sizzling pace.

“This is the world’s first demand-led energy shock,” said Lawrence Goldstein, an economist at the Energy Policy Research Foundation of Washington.

Forecasts of future oil prices range widely. Some analysts see them falling next year to $75, or even lower, while a few project $120 oil. Virtually no one foresees a return to the $20 oil of a decade ago, meaning consumers should brace for an era of significantly higher fuel costs.

At the root of the stunning rise in the price of oil, up 56 percent this year and 365 percent in a decade, is a positive development: an unprecedented boom in the world economy.

Demand from China and India alone is expected to double in the next two decades as their economies continue to expand, with people there buying more cars and moving to cities to seek a way of life long taken for granted in the West. 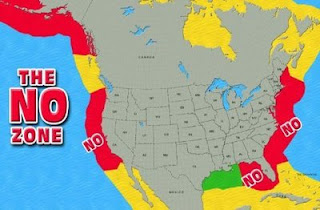 THE ONLY THING STANDING IN THE WAY OF US EXPLOITING THE OIL IN THESE REGIONS (AND US BUILDING MORE NUCLEAR POWER PLANTS AND MORE COAL-BURNING POWER PLANTS) IS THE DEMOCRAT PARTY.

REPEAT: THE ONLY THING BETWEEN US AND CHEAPER ENERGY AND A GROWING WORLD ECONOMY IS THE DEMOCRAT PARTY.

WE MUST DEFEAT THEM.
FOR THE CHILDREN.

AND A COMPLETE PICTURE OF DEMOCRAT OBSTRUCTIONISM AND HOW IT EFFECTS OUR ENERGY PRICES HERE AT DOUG ROSS. AND HERE AND HERE - AT GATEWAY.
Posted by Reliapundit at 11:34 PM

huh? 7 years of the bush energy policy that has caused oli and gas prices to double and you say it's all the democrat's fault. I'm pretty sure you'reno insane, but it's really hard to parse your logic. w.o.w.

Wow. Don't you realize that drilling is Alaska is a dead issue even for the Republicans? Not to mention the fact that no one knows how much oil it will give us. And I assume that you heard Bush pronounce "America is addicted to oil." We need alternative sources, not more oil. And please explain how all of this is only the DemocratIC Party's fault? (Here's a tip: if you want to be taken seriously, stop with the third-grade "You're a poopy head" digs with the "Look at me, I took off the IC in Democractic so they sound like rats. Really, it's beneath even you.)

WE CANNOT AND SHOULD NOT LOWER THE DEMAND FOR ENERGY.

More energy efficient policies and technologies made as accessible as possible could and would over time lower demand for energy. Why not pursue them?

"Repeat: the only things between us and cheap energy and a growing world economy is the Democrat [sic] Party."

I was unaware that the Democrat (sic) party was in control of the supply of oil... One learns everyday.

yes, we must provide cheap gas for the children- forget about how much in debt we are to china for the "war" in iraq, forget about what we are doing to the environment, education, health care...
yes, we must secure cheap oil for our children

i am so thankful that i dont have any, and i feel so bad for the children- they will need all the help they can get

i will respoind tyo all commenters so far:

we have no debt with china.

we buy things from them.

they make a profit on what they sell.

we take what we buy and resell it - and make a profit.

when we buy from them, they get money and we get goods.

it's an even-steven trade,

there is no deficit.

we get goods and they get money.

our money assets decline and our goods assets increases.

their goods assets declines and their money assets increases.

if the chinese want to sell their dollars now and get euros for them, then they are gonna get creamed.

they may sell some, but not all.

and it matters not a whit to you and me if they do.

the worst thing for kids all over the world is poverty.

without energy there is ONLY poverty.

to improve the living standards of the third world they need to industrialize. and that means use more energy.

india's and china's living standards have improved and that's why they have a demand now for more oil.

it's a good thing.

more than 500 million people in india and china have been lifted out of poverty since these two nations abandoned protectionism, and much of their socialist heritages.

we need to encourage the reszt of the third world to do the same.

they need factories not loamns from the IMF or World bank.

the democrtas in congress have OBSTRUCTED the exploitation of known oil reserves off the coasts of florida and california and in ANWR; (relative to demand) this has effectively DECREASED the supply and therefore is responsible for you and me and everyone in the world paying more now than we otherwise might be paying.

if the norwegians and british can drill safely in the north sea, then we can in the gulf and in the pacific.

katrina was the ost powerful gulf storm of all time and not a siongle solitary rig leaked.

and the canadians drill for oil right next door to ANWR. if they can, then so can we - AND WE SHOULD.

if the dems allowed us to get these supplies - and build coal-burning plants and new nuclear plants - AND THUS DIVERSIFY - oil would be cheaper.

IT IS THE FAULT OF THE DEMS, PERIOD.

CHANCE: diversification is good - but that doesn't lessen demand. it increases supply.

conservation is good but EXTREMELY overrated; you cannot save much - especially as compared to the GROWTH RATES: GROWTH RATES - ESPECIALLY IN CHINA AND INDIA - OUTSTRIP ANY CONSERVATION in the rest of the world.

and the increased demand for energy on china and india is DIRECTLY tied to their improving economies and improving living standards.

using less energy will only succeed in making them remain poor and having us to become poorer.

Bush was wrong when he said we were addicted to oil - it was a purely suck-up political moment; he was tryong to buy goodwill form the dems, and it failed as it always has.

we are no more addicted to oil than we are to breathing.

we need energy and oil is one of the best ever.

BY THE WAY YOU ALL: I AM A THRID GENERATION DEM - REGISTERED AS SUCH SINCE 1976.

I have heard ALL the leftist crap and at one time subscribed to it.

I have seen the light.

The policies of the Left suck; they don;t deliver.

I opposed both Reagan and Thatcxher at the time.

Hayek was right; Marx was wrong.

name one bush policy which has led to higher prices.

iraq is producing as much as ever.

IT'S THE DEMAND SIDE WHICH HAS CHANGED.

that's what the whole freakin NYTIMES article was about.

the biggest holder of Treasury debt was the U.S. government itself, with about 52 percent of the total $8.5 trillion in paper that's out there
...
That’s leaves a little over $4 trillion in public hands. The biggest chunk (about 25 percent of the $8.5 trillion total) is held by foreign governments. Japan tops the list (with $644 billion), followed by China ($350 billion), United Kingdom ($239 billion) and oil exporting countries ($100 billion).

--
Please do some fact checking before saying such ludicrous things like the US owes China nothing, please.

Bill Thompson - el Presidente for life said...
This comment has been removed by a blog administrator.
11:46 AM

I WAS CHIEFLY REFERRING TO WHAT WE buy FROM CHINA, AND THE DOLLARS WE EXCHANGE FOR THE GOODS WE GET.

IF CHINA USES THE DOLLARS WE GIVE THEM FOR THEIR GOODS AND THEN CHOOSES TO BUY US TREASURY NOTES, THEN THAT IS COMPLETELY SEPARATE DEAL.

WHEN THE USG "SELLS" THE CHINESE T-BILLS, ALL WE ARE REALLY DOING IS GETTING THE MONEY BACK IN RETURN FOR A PROMISE TO PAY THEM INTEREST.

IT'S A WIN-WIN FOR US: WE GET THE GOODS WE WANT A GREAT PRICE AND WE MAKE A PROFIT SELLING THEM AT RETAIL AND WE GET TO ENJOY THESE GOODS, AND THEN - WHEN THEY BUY T-BILLS - WE GET THE MONEY BACK!

AND WHEN THE DOLLAR WEAKENS, IT SCREWS THE CHINESE.

BTW: THIS HAS NOT A LOT TO DO WITH THE FACT FACT FACT THAT THE DEMS ARE OBSTRUCTING THE EXOPANSION OF OIL SUPPLIES AND THERFORE ARE RESPONSIBLE FOR OIL PROCES BEING HIGHER THAN THEY'D OTHERWISE BE.

AND NO USA POLITICAL POLICY IS GONG TO GET THE CHINESE TO STOP GROWING THEIR ECONOMY.


AND WE SHOULDN'T WANT IT AS IT IS THE CHIEF REASON SO MANY CHINESE ARE NOW LIVING WELL.

I DELETED AN IDIOTIC COMMENT BY BILL THOMPSON WHO DOESN'T SEEM TO UNDERSTAND SUPPLY AND DEMAND.

LET'S MAKE IT SIMPLE FOR HIM:

WHEN DEMAND INCREASES AND SUPLLIES DON'T, THEN PRICES GO UP.

OKAY BILL: DO YOU GET IT NOW?

YOU ARE TOO OLD TO BE BOTH A LEFTIE AND SMART.

SINCE YOU ARE OBVIOUSLY A LEFTIE YOU MUST THEREFORE BE DUMB.

YOUR ASTUTE USE OF ALL CAPS HAS PERSUADED ME.

THE CAPSLOCK BUTTON IS A PRIVILEGE, NOT A RIGHT.

Some interesting reading at this link:

So the USA is a better.... something by buying finished goods from all around the world as opposed to producing things at a living wage within our over-sight and selling said products to other nations?Or did I misunderstand you. And once again for this poor, slow-minded, being, we need to use up a limited resource of energy as fast and irresponsibly as possible to secure some sort of a future? Yes, let's do that instead of thinking how to use THE EARTH's energy resources in the best way for ALL LIVING CREATURES CURRENTLY BEING SUPPORTED BY THE EARTH. The earth provides all for all. If not than we got gipped with an inadequate planet or some pretty short-sighted thinking.

That buffoon that you cut and pasted all of your points from, Doug Ross, can't seem to make his case very well over on my blog iowaliberal.com. Maybe one of you "astute" Republicans could help him out. He seems to be at a loss for words when it comes down to actually providing facts to back up his bluster.