WHY I AM A FREDHEAD

The summary below is excerpted from a hostile source but I still like what I hear: 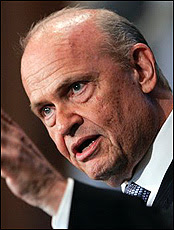 Thompson, who is expected to enter the presidential race formally in September, but plans to campaign in Iowa on Friday, was not known as a big-ideas guy and was hardly a heavy-hitter when it came to legislation during his Senate career from 1994 to 2002. Still, he was considered a reliably conservative vote on economic, security and social issues alike. He backed Bush's tax cuts, a prohibition on a late-term abortion procedure and voted to give the president the authority to invade Iraq.

More prominently, he established a reputation for working to limit the role of the federal government and protect states rights - an issue that remains very important to him and, perhaps, is an indication of what may lie at the root of his candidacy.

Broadly, he favors a strong federalist approach that emphasizes personal liberties and fiscal conservatism. "Centralized government is not the solution to all of our problems and, with too much power, such centralization has a way of compounding our problems," Thompson wrote in a recent column on his Web site. "This was among the great insights of 1787," when the Constitution was adopted, "and it is just as vital in 2007." He adds: "How we draw the line between federal and state roles in this century, and how we stay true to the principles of federalism for the purpose of protecting economic and individual freedom, are questions we must answer."

* Splits with Bush on immigration, opposing the president's comprehensive immigration law overhaul bill and, instead, argues for increased border security as well as full enforcement of current federal immigration laws. The issue has divided the GOP, and Thompson is seeking the support of Republicans who object to illegal immigrants getting a path to U.S. citizenship. In one online column, he says: "Federal law must be enforced, or our neighborhoods will continue to be the scene of chilling and lurid crimes committed by those who broke the law in the first place to come to America."

* Appears to take a hard-line approach to foreign policy. He criticizes the United Nations, saying the world body "seems to oppose human freedom rather than promote it." And, in one particularly incendiary commentary for ABC radio in April, he carried on about the perception of the U.S. around the world and its relationships with certain countries. He assails Mexico on immigration, arguing that leaders there "apparently have an economic policy based on exporting their own citizens while complaining about U.S. immigration policies that are far less exclusionary than their own." He adds: "The French jail perfectly nice people for politically incorrect comments, but scold us for holding terrorists at Guantanamo." Thompson saves his most aggressive comments for Russia, contending that ex-KGB agents "apparently" run the country, use their oil wealth to engage in blackmail, and dispose of people who cross them. "Oppose the Russian leadership, and you could trip and fall off a tall building or stumble into the path of a bullet."

* Emphasizes individuals' right to keep and bear arms, as well as the right to own and keep property. He suggests in one online piece that the Virginia Tech massacre could have been deterred had those who were at least age 21 and met certain criteria been allowed to carry concealed weapons on school grounds. In the Senate, Thompson voted against requiring criminal background checks for purchases at gun shows.

* Calls Bush's tax cuts a "success story" that helped grow the economy and says: "Letting them expire would amount to a tax hike of historic proportions." He also says the president should hold the line on spending.

More here. And another interesting post on Fred here