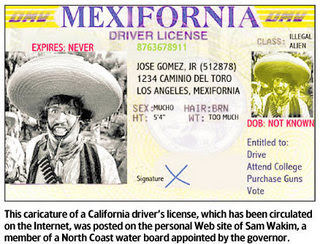 "An appointee of Gov. Arnold Schwarzenegger resigned abruptly Thursday after the Governor's Office learned that he had reprinted an image of a faux illegal-immigrant driver's license that Senate President Pro Tem Don Perata called "hate speech."

Sam Wakim, also a candidate for the state Assembly in 2008, was appointed by the governor to the North Coast Regional Water Quality Control Board last November. He posted the mock license on his personal Web site operated under the pseudonym "Abu David" in 2005.

"I think it's appalling for someone who's supposed to represent the public as a board member of a public agency to be engaging in hate speech," Perata said in a statement. "Mr. Wakim's Web postings clearly cross the boundaries of acceptable public discourse."

Any negativity at all is "hate" to Leftists these days -- unless you are talking about Christians, conservatives, G.W. Bush or Israel, of course.

They just don't have a any sense of humor at all..

Liberals will attack at the drop of a hat, but expect us to lay down and take thier crap.