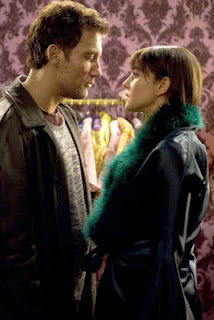 The first instance is a bit of a repeat - a new violent spy movie has come out and Hollywood and their leftist comrades at the NYTIMES/AP are touting it as the new anti-Bond. I guess they mean "new" because THE BOURNE ULTIMATUM is a month older. Here's how they pitch the new flick:

... [Clive] Owen, 42, plays Mr. Smith, an angry anti-hero who shoots every type of weapon in every way imaginable as he battles to protect a newborn baby from the bad guy, creepily and convincingly played by Paul Giamatti.

Owen's character is aided by a lactating prostitute (Monica Bellucci), with whom he shares a tenderly damaged love affair.

He has all the coolness of 007 -- a role Owen was once reportedly considered for -- but is as gritty and street-tough as an anti-Bond can get. 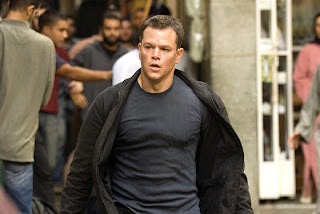 Damon and his director said the same crap and worse about Bond when they were promoting the latest Bourne movie.
WHAT'S WITH ALL THE BOND-BASHING?!

WHAT'S WRONG WITH BOND? HE'S A GOOD GUY! HE HAS ALWAYS DEFENDED US AND THE FREE WORLD!

(BTW: I don't care how leftist the movie is: IT HAS BELLUCCI IN IT (MORE OF HER HERE!), AND IS THEREFORE A MUST SEE.) 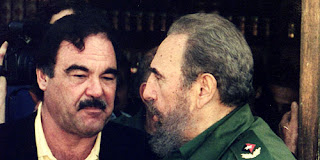 GATEWAY has another shocking instance of Hollywood collaboration with the enemy - SHOCKING EVEN BY HOLLYWOOD'S STANDARDS:

AHMADINEJAD Gives Oliver Stone Thumbs Up to Film Him!!

... Film director Oliver Stone, who has compared President Bush to Ahmadinejad, was not taking "no" for an answer this time. Director Stone reached out again to genocide-promoter Mahmoud Ahmadinejad last week to film his life story. ...

"Stone’s publicist referred to the bad image that the U.S. media has given to Islam and Islamic countries and said that the documentary could assist in countering such negative propaganda.”

Would Hollywood've ever done a favorable bio-pic of Hitler in 1940!?!? NO WAY. At that time - Hollywood's Golden Age, Hollywood was run by 1st generation immigrants WHO LOVED AMERICA, and didn't take her for granted - or hate her.
This Stone movie is truly one of the all-time lows for the chic degenerati of H-wood. And that's saying a lot!
Posted by Reliapundit at 6:45 PM