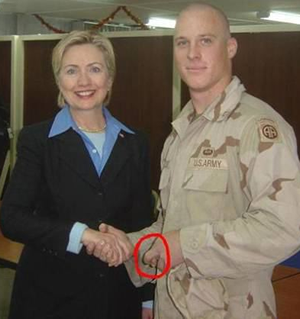 No. It makes her look like a big ass.

Just saying, on account of the fact that she voted for it based on the same intel' her hubby had, but then said she was misled. And 'cause she voted against funding the troops once they were there, and then voted against withdrawal by an arbitrary date, then for it.

And just recently she called on Maliki to resign. HAS SHE EVER CALLED ON AHMADINEJAD TO RESIGN? OR CASTRO? OR ASSAD!?
She is a crooked, phony, lying, demagoguing leftie.

Which makes her the perfect nominee for the Dems!
Posted by Reliapundit at 6:07 PM