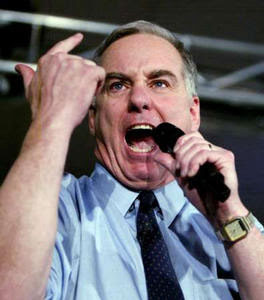 The high hurdles faced by congressional Democrats in their efforts to end the Iraq war make electing a Democratic president in 2008 the best way to finish the conflict, Democratic party chairman Howard Dean said Saturday.

He noted his party has made little progress toward ending the war, the cause, he said, that returned them to power.

``The American people hired Democrats last November to ensure that we end this war,'' Dean said during the weekly Democratic radio address. ``So let me be clear, we know that if we don't keep our promise, we may find ourselves the minority again.''

Dean put the blame for the lack of progress squarely on the White House and congressional Republicans for blocking his party's attempt at tying war funding to deadlines for troop withdrawals.

``We have to face the reality that Republicans in Congress are standing with President Bush as he stubbornly wields his veto pen,'' Dean charged.

In response, he proposed that the ``one way to truly ensure we end this war'' was to elect a Democrat as president in 2008.

THIS IS TRUE - IF BY "ENDING THE WAR" DEAN MEANS LOSE/SURRENDER/RETREAT.

AS REAGAN AND ORWELL OFTEN SAID, THE SUREST AND SWIFTEST WAY TO END ANY WAR IS TO SURRENDER.

IOW: THERE IS A DIFFERENCE BETWEEN ENDING AND WINNING.

AND THE CONSEQUENCES FOR "ENDING" THE CURRENT CONFLICT IN IRAQ - AS THE DEMS WOULD "END" IT - WOULD BE HORRIFIC.
AS VDH POINTED OUT YESTERDAY, THE ALLIES TOOK 300,000 CASUALTIES AFTER D-DAY. CASUALTIES AMONG MEN WHO WERE CONSCRIPTS.

IN IRAQ, WE HAVE LOST LESS THAN ONE PER CENT - ABOUT .5%. AND EVERY ONE WAS A VOLUNTEER.
WE CAN TAKE IT. WE CAN GUT IT OUT - AND WIN, IF AND ONLY IF THE DEMOCRAT DOVES DON'T FORCE US TO RETREAT AND ABANDON OURTALLIES: THE NASCENT DEMOCRTIC REPUBLIC OF IRAQ.
Posted by Reliapundit at 11:30 AM