IT'S TIME FOR LIEBERMAN TO PUT UP OR SHUT UP - OR: HOW JOE CAN FIRE REID

There's no reason we have to wait for Reid to do the honorable thing and resign; he won't do it because hasn't an ounce of honor; he is a traitor. (More on Reid's mendacious treachery HERE.) IT MATTERS NOT; JOE LIEBERMAN CAN FIRE HIM.

(UPDATE: AS AN ASTUTE COMMENTER POINTED OUT... ALL JOE HAS TO DO IS CAUCUS WITH THE GOP; HE DOESN'T EVEN HAVE TO SWITCH PARTIES!)

America is at a crossroads, Senator Lieberman, it faces one of its darkest hours even as our troops in the battlefield are being used as "political pawns," at the risk of their safety and their lives, by such power mongering, unscrupulous, demagogues as Senator Reid, and or betrayed by Democratic leftist ideologues in Congress!

The fate of our nation, of Israel, and of Western Civilization hangs on the balance.

The Islamofacist terrorist enemy must be defeated in Iraq, Afghanistan, and wherever it rears its ugly head of intolerance, oppression, and death, or we let it fester at our peril. It will come knocking at our door once again, much as it did on 9/11! 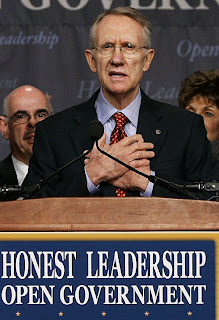 The time is now, Senator Lieberman! Fulfill your promise, and your commitment to our troops in the field, switch Parties now, become a Republican, end the impasse about the war funding, and wrest the Leadership of the Senate from infamous Harry Reid, the Democrats, and America's enemies! ...

I would prompt all who are concerned for the safety of our troops and for the future of America, and that wish that once and for all Senator Lieberman would come to the rescue of our troops and our nation by becoming a Republican, thus removing the Senate Majority from the Democrats and the Senate Leadership from nefarious Harry Reid, to please urge him to do so!

Let us flood his offices with calls, faxes, letters, and e-mails, urging him to have the courage to fulfill his promise, switch Parties, and wrest the power of the Senate from Reid's hands!

You can e-mail Senator Lieberman from his official website at:

LET'S GET JOE TO MAKE REID HISTORY!
Posted by Reliapundit at 7:12 PM

I don't think Joe has to 'become' a Republican. He has a vote and all he needs to do is use it against the Dems and for the Repubs.

u r right: he just has to caucus with them; he can remain and independent