THE THREE SURGES AND IRAN 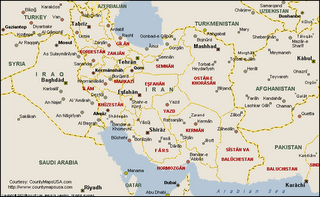 There is more than one surge now in the Gulf region:

There's the famous Bush Surge - which AS ANNOUNCED brings our troop levels in Iraq back up to previous high levels, but which might DOUBLE IN SIZE.

There's a surge of NATO troops in Afghanistan.

And there's an on-going build up of naval forces in the Gulf, forces from the US Navy and the GCC - the nations of the Gulf who opposed Saddam and oppose Iran.

ARE THESE THREE SURGES A COINCIDENCE? After all, this is a fairly large build up of forces - a build up of forces which nearly entirely surrounds Iran, just as Iran nears completion of their illegal nuke program, and as they have stepped up their support of jihadoterrorists in Iraq and Lebanon and Gaza?

That's why I think the answer is "no, these three surges are NOT a coincidence."

CHESS ANALOGY: We are getting our pieces on the board positioned for the end-game, when we will checkmate Iran.
Posted by Reliapundit at 12:11 AM