THE CUT & RUN REDS OF THE DEMOCRAT PARTY HAVE OUTTED THEMSELVES! 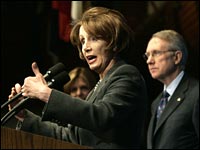 They are nothing but a bunch of jihadoterrorist appeasing scum:

As President Bush prepares to present his new strategy on Iraq to the American people, Democratic Congressional leaders said today they will fight any approach that calls for deploying more United States troops there.

"Rather than deploy additional forces to Iraq, we believe the way forward is to begin the phased redeployment of our forces in the next four to six months, while shifting the principal mission of our forces there from combat to training, logistics, force protection and counter-terror."

Running away - on a predetermined and public time-table, no less! - will send the same BAD signal we sent to our enemies in 1975. It is cowardly, It is wrong. It is typical Democrat policy. More HERE.