VDH: A NEO-CONSERVATIVE FOREIGN POLICY IS STILL THE BEST ANTIDOTE TO "REALISM" AND APPEASEMENT 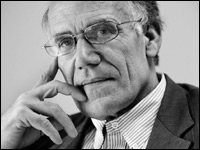 In the general condemnation of neo-conservatism, we forget, at least as it pertains to foreign policy, it arose from a variety of causes, not the least as the reaction against the moral bankruptcy of both rightist realism and leftist appeasement.

... In that context, Iraq in the climate of post-9/11 was an effort to find a consistent US position of toughness with terrorists and murderous dictators, and principled consistent support for reformers.

... For all the sorrow in Iraq, that vision is not over, and can still be realized if we stay calm and unyielding.

Neo-cons have been portrayed in the MSM as wild-eyed, unrealistic ideologues fueled by vengence and ethnocentrism. But VDH shows that neo-conservatism is really a sensible Third Way - and response to the failed policies which went before it. There's more wisdom in this post; RTWT.
Posted by Reliapundit at 7:08 PM