IS THE ARCTIC ICE BREAKING UP BECAUSE OF MAN-MADE-WARMING? 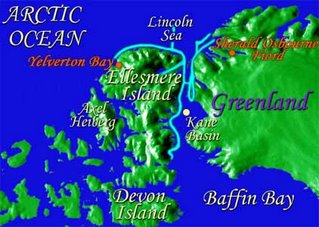 I excerpt below a report of a recent Arctic event from what is arguably the world's "Greenest" mainstream newspaper -- the London "Independent" (known to many as the "Subservient"). The event is hailed as evidence of global warming and I am sure that refutations of that will soon emerge, but in the meantime I think I should make some preliminary comments:
I am not a physicist or a chemist. I am a much-published psychologist with an interest in the sociology of knowledge. So I see my role in reporting on scientific questions outside my own field as being simply to draw attention to the full range of available information on the question concerned. Most scientists are probably aware that there is a "confirmatory bias" towards accepted theories in what is published in the academic journals so particular attention to non-confirmatory findings is simply good science.

But although I rarely comment personally in fields in which I am not expert, I am always, of course, delighted to point to failures in logic and it seems to me that the "Greenie" interpretation of the recent arctic event is very suspect from that point of view. 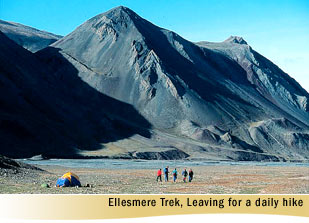 Why would a large bit of the Arctic ice shelf break off and fall into the sea? If global warming is happening, it should surely just shrink and melt away, with no reason to lose contact with the land. On the other hand, if the ice-shelf is EXPANDING then it should eventually get so big that it expands beyond the boundaries of the land -- causing the bit that is no longer supported by the land to fall into the sea.

So, in my opinion the recent event points overwhelmingly to an EXPANDING ice mass in that area of the Arctic, not a shrinking one -- which is what the Greenies would have you believe. Pesky eh?

I will leave it to others to comment on the other misrepresentations in the "Subservient" article:

"A vast ice shelf in the Canadian Arctic has broken up, a further sign of the astonishing rate at which polar ice is now melting because of global warming.

The Ayles ice shelf, more than 40 square miles in extent - over five times the size of central London - has broken clear from the coast of Ellesmere Island, about 500 miles south of the North Pole in the Canadian Arctic, it emerged yesterday. The broken shelf has formed an ice island, in what a leading scientist described as a "dramatic and disturbing event", citing climate change as the cause."

Note that this recent article points to a COOLING arctic, which again suggests that the ice-shelf breakoff is due to an EXPANDING ice-mass, not a shrinking or melting one. I hope to have more to say about sea-ice versus land-based ice tomorrow

Because global warming is a religious belief rather than a scientific one, however, Greenies do from time to time accept that the ice-mass in places like Greenland and the Antarctic is expanding. They say that global warming produces more evaporation off the ocean and hence more snowfall and hence ice buildup. NO evidence can count against their belief. The global warming belief thus fails the test of falsifiability, which is basic not only to scientific statements but to empirical statements generally. The global warming belief is thus a theological, not a scientific one -- on a par with the Christian ability to explain the existence of evil despite their God being omnipotent and benevolent 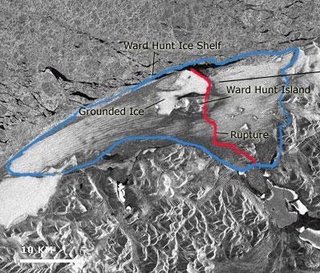 Reliapundit adds: I have read elsewhere that this stuff happens because ocean currents have changed and because the water up there in the Arctic is warmer now than it has been in a long time. But even if it is the case that rising atmospheric temperatures are causative, I remain unconvinced that the cause of rising air temperatures is anthropogenic.

Greenland was once GREEN - naturally!

And I also question the negative - yea nearly DOOMSDAY! - reaction to events like this; I mean if the Arctic is becoming more temperate, then this could be a HUGE BOON for humanity, as it might be a great benefit for agriculture - (huge new tracts will open up for man and beast), and global shipping! Maybe we should be thankful we are entering a new more temperate age? The article accompanying the satellite photo notes this:

The scientists believe that the breakup and disintegration of the Ward Hunt Ice Shelf can be attributed to warming temperature trends that began in the 19th century.

Meaning the current trend is 200 years old. And this is far from the first time in history that this region has warmed up. It was also much warmer in these regions in the earliest centuries of the 2nd millennium. UPDATE- 12/30/06: MORE HERE.
Posted by JR at 8:22 PM