THE ULTIMATE ROOT CAUSE OF THE GWOT 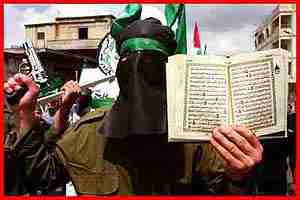 What's the ultimate root cause of the GWOT? It ain't Israel or Bush or Iraq or Rove or Halliburton or 9/11. It is this (hat-tip Hot Air/Robert Spencer - in a must see video):

Qualities of the Believers

[Koran - 48:29] Muhammad - the messenger of GOD - and those with him are harsh and stern against the disbelievers, but kind and compassionate amongst themselves.

The enemy hates us because of who we are and what we believe, NOT because of our foreign policy. The enemy hates us because we are not Muslims. The enemy wants us to convert or become dhimmis. Or die. This is what THEIR religion tells them they MUST do. If we want to remain free and modern, then we must defeat them. Utterly. Then we will be free and at peace. Until then, we will be at war - a war they started 1400 years ago. (This enemy has also been killing other "lesser" Muslims since then, too: Shias; Sufis et al.)
Posted by Reliapundit at 12:00 AM

all these monotheistic religions seem much the same to me. Have you read the old testament? Perhaps you should blow yourselves to pieces (such is your eagerness for pre emptive nuclear strikes).

i read the bible daily.

there is next to NO prescriptive genocide, just descriptive. all in the past.

there is no call to murder Gentiles, nor to even convert them.

so you are fucking wrong - brainwashed by the POMO multi-culti moral/cultural relativists.

wake up. or die dumb. your choice.