SARKOZY UNAMBIGUOUS ABOUT DEALING WITH JIHADISTS AT HOME AND ABROAD 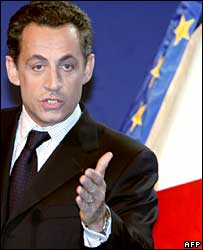 ... Sarkozy, told Israeli Vice Premier Shimon Peres in Paris on Monday that he views Hizbullah as a terror organization with which he has no intention of dealing of. Sarkozy also said that he would not deal with Hamas as long as the organization refuses to recognize Israel...

He said this as the Police Chief of Paris warned that the threat of terror in Paris is still quite high:

IHT: PARIS: The Paris police chief said Monday that the threat of a terror attack on the French capital remains high, requiring continued intelligence and surveillance efforts. Pierre Mutz, speaking at a city council meeting considering the police budget for 2007, did not name any specific new dangers, but said "The threat remains high."

The government ordered extra military patrols on public transport before the Christmas and New Year's holidays, when visitors and tourists pack Paris.

Instead of coddling and appeasing islamothugs, Sarkozy will counterattack them and he won't undercut Israel for doing the same - as Chirac is doing right now in Lebanon! (More on why Sarkozy is good HERE.)
Posted by Reliapundit at 8:14 PM