HOW BAKER, HAMILTON AND THE ISG WEAKEN AMERICA 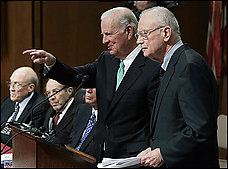 Even if the President rejects the worst of the 79 prescriptions for appeasement in the Baker-Hamilton Iraq Study Group's senile and solipsistic soliloquy, the widespread publication of the report and the mood of despair that it has engendered seriously weaken America's security. In today's Wall Street Journal, Bret Stephens gets it pretty nearly perfectly right:

The operative word in the ISG report is "should," which is what grammarians call a defective verb.

The report easily contains more than 100 shoulds, varying tonally from hectoring to plaintive to nitpicking. The report's ninth recommendation, for instance, stresses that "Iran should be asked to assume its responsibility to participate in the Support Group" while the 23rd says "the President should restate that the United States does not seek to control Iraq's oil." Only rarely do the ISG authors employ different language, such as when they say "there must be a renewed and sustained commitment by the United States to a comprehensive Arab-Israeli peace." Like an editorial in the New York Times, this is an exercise in homiletics, not persuasion.

By contrast, the word "honor" appears just once: "We also honor the many Iraqis who have sacrificed on behalf of their country," write ISG co-chairmen James Baker and Lee Hamilton, who also put in a kind word for our Coalition allies.

But honor isn't simply a sentimental verb. It is a decisive principle of action in all foreign policy, never more so than in the honor-obsessed Middle East. It is not about good intentions, wisdom or virtue, but about appearances and perception: "Honor acts solely for the public eye," wrote Tocqueville. In practice, it means standing by one's friends and defying one's enemies, whatever the price. During the 1973 Yom Kippur War Richard Nixon ordered the military resupply of Israel in its hour of need not because he was sympathetic to Jews -- he wasn't -- but because he understood that the U.S. could not be seen to let a client down. Nine months later, he was accorded a ticker-tape parade through the streets of Cairo.

How does the ISG report meet the test of honor? Mainly by failing it. The report is chiefly notable for declaring in its first sentence that "the situation in Iraq is grave and deteriorating." This statement of fact is being celebrated by sundry commentators as a bold and necessary act of speaking truth to power. This may be true in Washington, but what does it actually achieve in Iraq? The invaluable translation service Memri offers a clue in the form of a response to the ISG report on Islamist Web sites connected to the Iraqi insurgents: "Now that its wager on the Shi'ite government [of Iraq] has failed [to pay off]," goes the message, "the American administration [is striving] to foil . . . any attempt to [establish] . . . an Islamic State in the form of a Caliphate in Iraq . . . "

To counter the "realists" who wish upon us the prospect of a defeated and dishonored America as the panacea for all of the problems in Iraq, I would like once again to offer these words from President John F. Kennedy's Inaugural Address:

"Let every nation know, whether it wishes us well or ill, that we shall pay any price, bear any burden, meet any hardship, support any friend, oppose any foe, in order to ensure the survival and the success of liberty."

Don't you think that following Kennedy's simple prescription will lead to a better America and a better world?
Posted by Punditarian at 10:22 PM