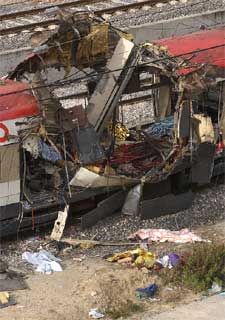 The AP Reports (Hat tip: Charles Johnson) that Spanish authorities have derailed a terror plot potentially as devastating as the 3-11-2004 train attack; [191 murdered; pictured at left]:

The men — 10 Spaniards and a Moroccan — were detained in pre-dawn raids and included two brothers of a former detainee at Guantanamo Bay, Cuba. Police said the operation was ongoing, and more arrests were expected.
The suspects were believed to be aligned with the Moroccan Islamic Combatant Group, according to Spanish news reports. Members of the extremist organization have been linked to the 2004 train attacks in Madrid and bombings in Casablanca in 2003. Two other suspected members of the group were arrested in November in Melilla, another Spanish enclave on the African coast.
The Ceuta cell had recently begun discussing taking action to launch an attack, although they were in the early stages and are not believed to have selected a target, said Interior Minister Alfredo Perez Rubalcaba, who was traveling in Algeria.

Reliapundit asks: When will Leftist appeasers like Zapatero learn this lesson?
Posted by Punditarian at 10:14 PM