IS THERE A NEW TRIBAL STRATEGY IN THE GWOT? 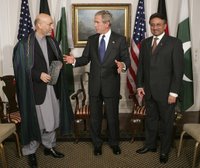 Many have been whining that we're losing the GWOT and relenting to the enemy ever since Musharraf signed a deal with the tribal leaders of the tribally administered region within Pakistan called Waziristan - despite the fact that the US state department approved the deal, and Karzai of Afghanistan had no problem with it, either.
Basically the deal was simple: the Pakistan "federales" would stay out of the tribal zone, and in return the tribes would expel foreign fighters, i.e al Qaeda. If the tribes don't uphold their end of the deal, then Musharraf is free to reenter with his army.

Yesterday, at this blog, Pastorius linked to another blogger's suggestion (Steve Harkonen) that this treaty cleared the way for US forces to follow al Qaeda from Afghanistan INTO Waziristan.

Perhaps. But I have another idea which explains why the US is okay with Musharraf's deal: I feel that we are employing a strategy aimed at co-opting the TRIBES, and turning them against al Qaeda. After all, we are using this strategy - to some good effect - in Iraq:

The five militants were captured without a fight in a car under a bridge in Ramadi, capital of Anbar province, police Major Salam Obeid said. Tribal leader Sheikh Sattar Al Buzayi confirmed the incident. The province, which makes up a third of Iraq's territory, is the heartland of the Sunni Arab insurgency and has been the deadliest region of Iraq for US forces. Osama bin Laden's followers control towns and villages throughout the Euphrates valley from Falluja, near Baghdad, to the Syrian border.

But their violent rule and severe interpretation of Sunni Islam has alienated traditional-minded Sunni tribal leaders.

Tribes are by defintion very traditional and persistent, and therefore VERY USEFUL IF WE CAN GET THEM ON OUR SIDE - especially against terrorists who need local support for their cover. In the Sunni regions of Iraq, MOST of the tribes are now fighting AGAINST al Qaeda and for the Iraqi federal government. This is a very VERY good development in Iraq - [UPDATE: MORE PROOF HERE THAT IT IS WORKING] - and it would be good if it develops this way in Waziristan.

And another thing: Musharraf's deal came just as NATO began EXPANDING it's counter-offensive against the Taliban and al Qaeda in Afghanistan. And as we are building up our naval assets in the region. That's why I seriously doubt that this was NOT coordinated with the US and NATO, and therefore it seems even more likely to me that it is a positive strategy - one developed to improve results... in the very near term. Like killing OBL and Dr. Z.

Complete round up at MEMEORANDUM. 10/06/06 UPDATE: Welcome Gateway Pundit and Pajamas Media readers!
Posted by Reliapundit at 7:22 PM

What do you think about the fact that the tribes also kill each other. In fact, isn't it true that, in Iraq, the bulk of the fighting is now between the Sunnis and the Shiites? Do they count as tribes? Maybe not.