Birds Of A Feather - The Left And Religious Fascists 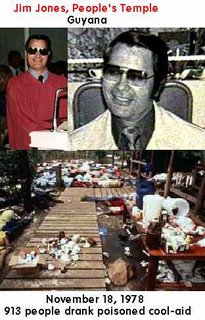 The Left loves to brand the religious right as "Nazis" and "fascists". But the truth is, the fascists are almost always people of the Left, even in the case of religious fascists. Check this out (via Hip Hop Republican):

Jim Jones - was a progressive left winger whose intentions were to create an agricultural utopia in the jungle, free from racism and based on quasi-communist principles. Jones told his followers to think of him as the incarnation of Christ and God. He took hundreds of black people most no doubt Democrats to Guyana killed them all.

Fred Phelps - Phelps' voting registration in Kansas is Democrat. Phelps has run in various Kansas Democratic Party primaries in Kansas five times, but has never won. These included races for governor in 1990, 1994, and 1998, receiving about 15% of the vote in 1998.

According to Phelps, members of the Westboro Baptist Church helped run Gore's 1988 campaign in Kansas. Phelps has stated that he hosted a Gore fundraiser in his home attended by about 500 people. Gore spokesman Dag Vega declined to comment; "We are not dignifying those stories with a response. Also, Fred's son, Fred Phelps Jr. held a fundraiser, which Al and Tipper Gore attended, at his home in Topeka, and Fred, Jr. served as a Gore delegate to the 1988 Democratic National Convention.
The reason Lefty preachers are more likely to resort to murderous fascism is because Leftism is utopian. Jim Jones was a utopian. He wanted to create a perfect environment for his followers. When he was not able to achieve that utopia, death seemed like the second-best answer. This is the method of utopians from Stalin to Pol Pot to Jim Jones.

In the case of Fred Phelps, it is clear that his philosophy is that the fate of a people is inextricably linked to the behavior of its government. This is a Leftie idea. Righties think the less government the better. Freedom is the watchword of the right. Fred Phelps is not at all interested in freedom, so he went with those who would govern more strongly, like Al Gore.
Posted by Pastorius at 7:10 PM

Thanks, Moderationist. I appreciate the encouragement.