DICK MORRIS: HILLARY WILL BE NEXT PREZ 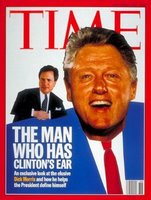 Dick Morris pulled no punches in talking about his former bosses, Hillary and Bill Clinton, to members of the Bay Area Economic Club Monday night. Of Bill Clinton, Morris said, "He's often not a very nice person to be with in private." Of Hillary Clinton, he said, "She reminds me of President Nixon. She's very ruthless." ... Morris predicts Hillary Clinton will be the next president. But, he is not happy about his prediction. He does not think she would make a good president.

This is excellent news. Why, you ask? Because Dick Morris is almost always wrong when he makes election predictions. A good political advisor perhaps, but a horrible
Posted by Jim Rose at 10:56 PM

Videos by Professor Howdy said...
This comment has been removed by a blog administrator.
11:03 PM

My army unit will never serve under her.

bill never "sderfved" under her either. heh.