20 REASONS WHY IT IS COMPLETELY REASONABLE TO DOUBT OBAMA IS A REAL CHRISTIAN OR A PATRIOT, AND TO SUSPECT OBAMA IS REALLY A CRYPTO-MUSLIM WHO HATES THE USA AND OUR ALLIES

1 - his father was a muslim, and he titled his memoir "Dreams from my father'.

2 - his Indonesian step-father was a muslim.

3 - his step-father sent Barack to a madrassa for his primary education.

4 - his roommates in college were muslims.

5 - the first country he ever visited was not Indonesia where he spent his childhood, or Kenya where his supposed biological father was from, and not a country in Europe such as Netherlands where he might indulge in pot-smoking (his favorite activity in high school), but Pakistan a muslim nation.

6 - he didn't become a Christian until after moving to Chicago, and then converted in a church whose pastor was antizionist black liberationist Rev. Jeremiah Wright.  Despite being a member of this church for decades, Obama was forced to deny he had ever listened to any of Wright's controversial sermons, one of which famously said that the USA deserved 9/11.

7 - his first major foreign policy speech was delivered in Cairo, and he demanded long-time ally Mubarak allow members of the Muslim Brotherhood to attend.

9 - he overthrew Kadafy - who was an ally in the war against radical islam at the time - and basically handed Libya to the islamists.

10 - he drew a line in the sand regarding Assad's use of WMD, and then promptly forgot it - sending a message that he would not intervene at all and would let the islamists and the Iranians have their way.

11 - he ignored advise from his Sec Def Panetta and the JCOS and withdrew all USA troops from Iraq creating the vacuum for ISIS.

12 - he attacked Israel for building apartments in Jerusalem.

13 - he refused to re-arm the IDF during the last Gaza war against Hamas.

14 - he refused to meet with Israeli PM on his most recent visit to the USA.

15 - he broke every promise he made regarding non-negotiable points in his Iran deal such as 24/7 inspections and enrichment, and is giving them $150 billion over the objections of our best ally in the region - for a deal which has already started a nuclear arms race in the middle east.

16 - he gave the enemy 5 top commanders to get berghdal, a deserter.

19 - he called the muslim call to prayer the most beautiful sound on earth, and can recite it in Arabic.

20 - he invited Ahmed the clockmeister to the White House, but not the family of Kate Steinle or the families of those murdered by islamists in Benghazi, an attack he lied about, and continues to lie about.

TAKEN SEPARATELY SOME MIGHT SEEM HARMLESS OR MERELY LIKE THE BAD DECISION OF AN INEPT AND NAIVE LEFTIST.

TAKEN TOGETHER, THEY PAINT A VERY DIFFERENT PICTURE:

THEY APPEAR TO BE A CONCERTED AND WELL THOUGHT OUT PLAN EXECUTED OVER SEVERAL YEARS IN AN EFFORT TO BRING ISLAMISTS TO POWER IN AS MANY PLACES AS POSSIBLE.

WOULD ANYONE EXCEPT AN ISLAMIST DESIRE THIS, LET ALONE A MUSLIM? 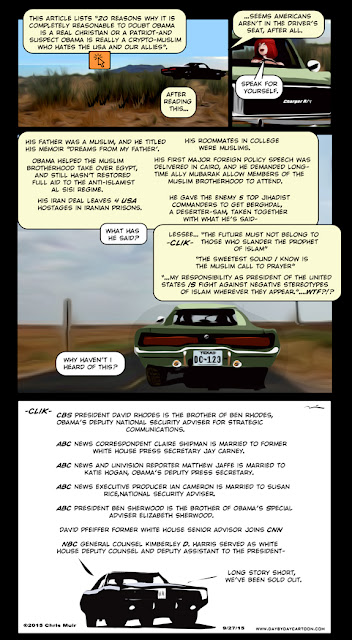 21 - "I will stand with them (Arab and Pakistani Americans) should the political winds shift in an ugly direction." - page 261 of the paperback edition of “The Audacity of Hope by Barack Hussein Obama

I did a toon on your excellent article and linked it at www.daybydaycartoon.com.

Jeremiah Wright has crawled back out from under his rock to be interviewed by Sean Hannity. In that interview he allows as how Obama was Muslim and to Wright's knowledge never formally adopted Christianity. All Wright did was make it easier to deal with Jesus Christ as a Muslim.

So Obama's weak and mostly not present protestations of being a Christian have weaker foundations than you cite.

We, the people of the United States of America, have done it all to ourselves. We elected the ....

This is about to be better linked at my wordpress. This is priceless intel, although whatever the hell it might mean in today's world is puzzling at best.