TO SAVE HER CAMPAIGN, WILL HILLARY "COME OUT" AS A LESBIAN OR AS BISEXUAL ON "THE ELLEN SHOW"? 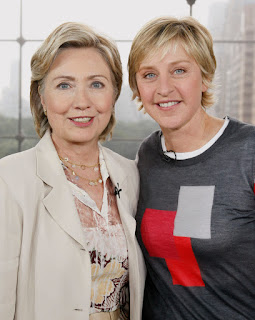 It looks like Democratic presidential candidate Hillary Clinton has another televised interview lined up, this time with Ellen DeGeneres.

DeGeneres tweeted Monday that Clinton, along with Caitlyn Jenner and Nobel Peace Prize winner Malala Yousafzai, are to be among the host’s guests during the premiere week for her day-time talk show beginning Sept. 8.... Clinton also appeared on the show in 2007 when she was seeking the Democratic presidential nomination. During that interview with DeGeneres, who is gay, Clinton discussed her support for civil unions for same-sex couples, but not marriage rights, which she said should be left to states. In the years since, Clinton has become a supporter of same-sex marriage.

The sit-down with DeGeneres would be one of only a handful of televised interviews the former secretary of State has done since formally entering the 2016 presidential race. Her first was in July with CNN.

HMMM... IF SHE COMES OUT AS BISEXUAL SHE CAN DIVERT ATTENTION FROM HER TREASON AND BLAME THE ATTACKS ON HOMOPHOBIA....