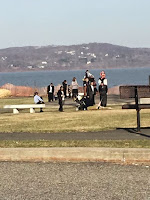 A politician named Edwin Day brought attention to an alarming picture taken last week on Passover of a Haredi family who allowed their children to sit atop a 9-11 Memorial monument in Haverstraw Bay:


A photo of a family standing around and their child sitting on our 9/11 Memorial in Haverstraw Bay Park has been brought to my attention (the child in the striped shirt at the back of this photo).

The ethnic or religious makeup of the family in question is not what matters here. What matters, and what I would ask everyone to focus on, is the desecration of this sacred site. I have reached out to Sheriff Falco and our Environmental Resources/Parks Coordinator to discuss ways to prevent this sort of behavior in the future through signage and patrols, and urge all parents to discuss with their children the importance of respecting site such as this one.

I think there's two monument sections, and another child in black outfit is sitting on the other one. This is an absolute embarrassment, and it's not the first time an atrocity like this has happened. Two years ago, some Haredis swam around in an Israeli memorial fountain dedicated to the memory of a group of soldiers who'd died in a helicopter accident en route to Lebanon, upsetting the mother of one of the deceased.

The worst part is, these insular Haredis are the kind of people who refuse to help build the country or serve in the army, let alone anything else that might help prevent innocent lives from being lost. Now, even in America, as we see, there's Haredi kooks out there who probably don't even understand English text who're acting disrespectful of memorials to people who lost their lives in violent crimes by violent men whose ideology targets mainly Jews. They're also drawing attention away from the more pressing issues with their degrading acts. Even the Haredi-run Yeshiva World site slammed this staggeringly brainless show of contempt. If the Haredis who'd been at the park are smart, they'll apologize and make sure they teach their children why it's wrong to sit around on memorial structures dedicated to innocent people who were attacked by monsters whose Koran condones anti-semitism.

I want to thank Mr. Day for bringing this topic to everybody's attention.
Posted by Avi Green at 4:10 PM