PROPAGANDA: IT'S WHAT THE LEFTIST DOMINATED MASS MEDIA DOES BEST 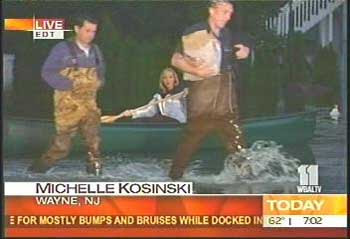 October 15, 2005Michelle Kosinski plays Today viewers for foolsAnd people wonder why no one trusts the media (via Drudge):If Michelle Kosinski's canoe had sprung a leak on NBC's "Today" show Friday, she didn't have much to worry about.In one of television's inadvertently funny moments, the NBC News correspondent was paddling in a canoe during a live report about flooding in Wayne, N.J. While she talked, two men walked between her and the camera -- making it apparent that the water where she was floating was barely ankle-deep.Matt Lauer struggled to keep a straight face, joking about the "holy men" who were walking on water."Have you run aground yet?" Katie Couric asked."Why walk when you can ride?" Kosinski replied.Later, an NBC News spokeswoman explained that Kosinski had been riding in deeper water near an overflowing river down the street, but there were concerns that the current was too strong for her."It's not like we were trying to pass it off as something it wasn't," spokeswoman Lauren Kapp said.Riiiight.

Update 10/19: I've been wondering why this post has been getting so many Google hits, and now I know -- the video clip was featured on "The Daily Show" on Monday night.

KOSINSKI GOT CAUGHT DOING WHAT THE LEFTISTS OF THE MASS MEDIA DO BEST: PROPAGANDIZE. 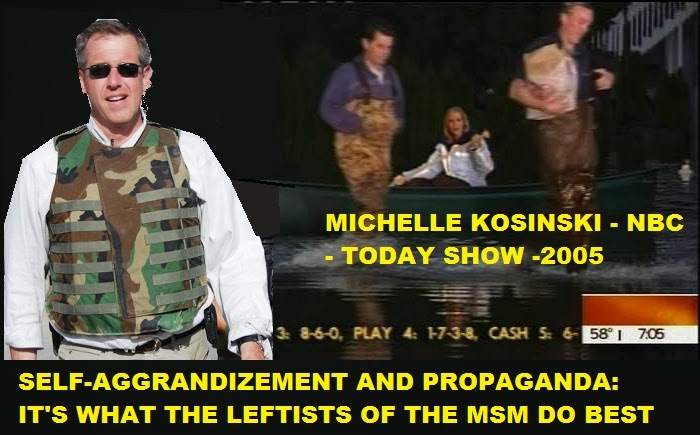