CAN CHRISTIANS BE BLAMED FOR THE CASUALTIES DURING THE CRUSADES?


After conceding that there will likely always be those who will seek to “hijack religion for their own murderous ends,” he reminded his audience that Islam is merely following a dark path forged centuries ago by Christians.


“Unless we get on our high horse and think this is unique to some other place, remember that during the Crusades and the Inquisition, people committed terrible deeds in the name of Christ,” Obama said. “In our home country, slavery and Jim Crow all too often was justified in the name of Christ.”

Obama also denounced Islamic State terrorists for professing to stand up for Islam when they were actually “betraying it.”

“We see ISIL, a brutal vicious death cult that in the name of religion carries out unspeakable acts of barbarism,” he said criticizing them for “claiming the mantle of religious authority for such actions.”

But, who is to blame for the casualites in the Crusades?

Do we blame FDR for any casualties in WW2 or Wilson for any in WW1 or Lincoln for any in the Civil War?

We don't because the aggressor is at fault, not the defender, not the side responding to aggression, not those acting in self-defense.

Who is to blame for the Crusades?

Not the Christians - who were counter-attacking against the invaders who had invaded and taken over lands that had been Christian for centuries.

The Crusades were a counter-attack against an aggressor, against an invader.

Blaming Chirstians for the Crusades is like blaming FDR for the casualites in WW2.

And that's inaccurate and immoral.

And it absolves muslims for their aggression.

That's why I'm not surprised Obama made the claim.

Obama is nothing if he is not deceitful and immoral. 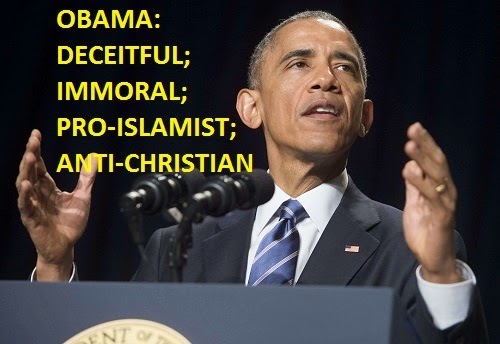