THIS IS JUST THE START:


Two more Lebanese soldiers have reportedly been killed, as fighting with Syrian rebels on the Lebanese border continues for a fourth day.
A young girl has also been shot dead, after clashes spread.
The fighting began on Saturday when rebels raided Arsal, a mainly Sunni Lebanese town, after Lebanese forces detained an alleged member of Syria's Islamist militant group al-Nusra Front.
At least 15 soldiers have been killed in the area since the weekend.


The Lebanese army managed to retake most of the positions that been seized by ISIL militants and other Takfiris in the village of Arsal. But the cost has been heavy; with the Lebanese military announcing that at least 16 soldiers had been killed as the fighting entered its third consecutive day. Lebanon’s premier declared full political cover for the army in this battle, after the cabinet held an extraordinary meeting.
Lebanon’s army described what is taking place as the most dangerous developments the country has yet to witness. In a rare press conference Lebanon’s army chief said that the attacks come after a long period of planning large scale operations against the Lebanese military. Hezbollah for its part vowed to continue carrying out its responsibility in protecting the country against such threats.


It’s just the latest step in the Islamic State’s regional expansion. What was recently a ragtag cadre of former al-Qaeda operatives has now morphed into a transnational, fully militarized and very rich operation said to control more than one-third of Syria’s territory. It makes al-Qaeda look like a bunch of wannabe jihadists.
It’s “worse than al-Qaeda,” Brett McGurk, the State Department’s deputy assistant secretary for Iraq and Iran, told lawmakers last month. It “is no longer simply a terrorist organization. It is now a full-blown army seeking to establish a self-governing state through the Tigris and Euphrates valley in what is now Syria and Iraq.”
Some accounts say it’s no longer seeking to do this — but has already done it.

THIS IS WHAT WE GET BECAUSE OBAMA HAS:
AT BEST, THE BURGEONING GLOBAL RELIGIOUS WAR IS THE FRUIT OF APPEASEMENT.

IT MAY VERY WELL BE THE THORNY FRUIT OF A  FALSE PROPHET: 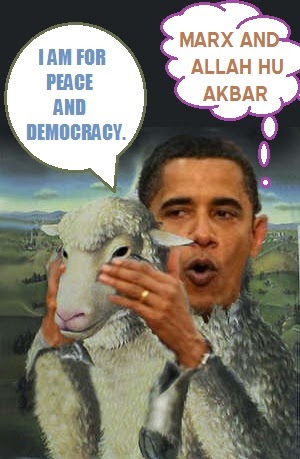 Posted by Reliapundit at 7:59 AM

Everyone needs to come together and defeat these terrorists before this cancer keeps spreading.