VANDALISM IN SHUAFAT WILL TAKE MONTHS TO REPAIR 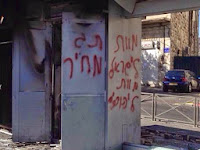 Israel National News showed some pictures of the damage done to the light rail stations in Shuafat, and a most interesting revelation is made:


Pictures from one of the destroyed stations with its torched ticket machines reveal Arab "price tag" vandalism, with the words "price tag" and "death to Israel, death to the Jews" scrawled in Hebrew on it in red paint. (There are those who claim past "price tag" vandalism was mostly staged by Arabs to incite against right-wing Jews.)

I'd say this is another clue that the strange "price tag" attacks that faded from the news a few months ago really were the work of Muslim vandals.


As noted the destructive riots broke out after the murder of an Arab youth, Mohammed Abu Khder.

Israeli leaders - including Jerusalem Mayor Nir Barkat and Prime Minister Binyamin Netanyahu - rushed to condemn the murder, giving life to claims that it was an act of Jewish "revenge" after the abduction and murder of Naftali Frenkel, Gilad Sha'ar and Eyal Yifrah, despite the lack of evidence supporting the claim.

Palestinian Authority (PA) Chairman Mahmoud Abbas, as well as some in the international media, have since repeated those claims as fact, and Abbas's Fatah has since called for a violent "revolution."

However, great doubt was cast on the "revenge" theory after a Channel Two report noted Abu Khder's parents gave conflicting testimony to police over an alleged attempted kidnapping of their younger son the day before the murder. Mohammed's mother claimed that "settlers" had attempted to snatch the boy, while the father insisted the assailants were in fact Arabs.

A top-ranking retired police official told Arutz Sheva on Wednesday that the Abu Khder family is known to the police as a "problematic" family with severe internal conflicts, saying "I have no doubt that as time passes it will be clarified that the murder was criminal and nothing more."

It could've been deliberately committed for the sake of stirring blood libels, and the family went right along with it. In that case, they're as guilty as the rest of the inciters.
Posted by Avi Green at 5:17 PM