In an escalation of tensions, the Obama administration accused Russia on Monday of conducting tests in violation of a 1987 nuclear missile treaty, calling the breach "a very serious matter" and going public with allegations that have simmered for some time. The treaty confrontation comes at a highly strained time between President Barack Obama and Russian President Vladimir Putin over Russia's intervention in Ukraine and Russia's grant of asylum to National Security Agency leaker Edward Snowden.

A STERNLY WRITTEN LETTER NO DOUBT.

ONE THAT WILL HAVE AS MUCH EFFECT AS OBAMA'S RED-LINE IN SYRIA.

I BELIEVE OBAMA IS NOT JUST APPEASING PUTIN - NOR JUST BEING "MORE FLEXIBLE"; THE WAY THINGS HAVE BEEN GOING, OBAMA MIGHT AS WELL BE WORKING FOR PUTIN.

YES: ALL THIS IS ACCORDING TO PLAN: 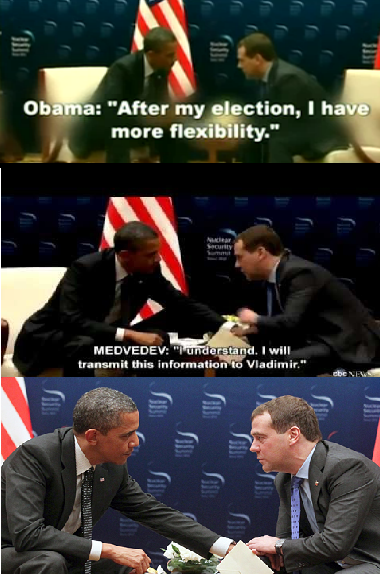 Posted by Reliapundit at 9:25 PM