NOT HEAVEN FOR BLOOMBERG, BUT THE EIGHTH CIRCLE OF HELL

Former New York City Mayor Mike Bloomberg is sure that he is going to heaven for his efforts to undermine your God-given, Constitutionally protected right to self-defense:


"I am telling you, if there is a God, when I get to heaven I'm not stopping to be interviewed. I am heading straight in," he told reporter Jeremy Peters. "I have earned my place in heaven. It's not even close."

But Bloomberg believes that although you should live in a gun-free zone, he should be protected by armed bodyguards wherever he goes:

Bloomberg’s new security team will comprise a current lieutenant and several detectives, all with more than 20 years on the force. They will file for retirement immediately after mayor-elect Bill de Blasio is sworn in on Jan. 1, sources said.
With public salaries of at least $120,000 each, they’ll all get pensions that amount to at least half that much — on top of their pay to keep working for Bloomberg, sources said.
“They’re all getting six-figure salaries,” one source said.
While Bloomberg’s security detail has 17 members, not all will be riding his gravy-train run.
The unidentified lieutenant who heads the team will land the biggest windfall and “is getting paid a lot more than the detectives,” a source said.
The NYPD provides Bloomberg with ’round-the-clock protection that includes a driver, bodyguard and advance man who secures the mayor’s destination whenever the mayor is out and about.

Bloomberg thinks that he deserves to be protected by firearms, but you don't.

In plain English, he is  a hypocrite.

And Dante found out, as described in his immortal Divina Commedia, that hypocrites are consigned to the Eighth Circle of Hell.


As the eighth of nine circles, Malebolge is one of the worst places in hell to be. In it, sinners guilty of "simple" fraud are punished (that is, fraud that is committed without particularly malicious intent, whereas Malicious or "compound" fraud — fraud that goes against bond of love, blood, honor, or the bond of hospitality — would be punished in the ninth circle). Sinners of this category include counterfeiters, hypocrites, grafters, seducers, sorcerers and simonists. [bold/red added]


Political corruption (fifth ditch), the crime for which Dante himself was falsely charged when he was forced into exile, links back to similar abuses within the church (simony) and points ahead to the sin of hypocrisy. The longest single episode of the Inferno, launched when Virgil confidently believes the promise of the devils guarding the fifth ditch, concludes when the travelers make a narrow escape into the sixth ditch and Virgil learns from a hypocrite that he has been duped (Inf. 23.133-48). Dante adorns the hypocrites in religious garb--hooded cloaks similar to the elegant ones worn by the Benedictine monks at Cluny (in France)--in accordance with the biblical condemnation of false piety: just as Jesus compares hypocritical scribes and Pharisees to tombs that appear clean and beautiful on the outside while containing bones of the dead (Matthew 23:27), so the bright golden cloaks of Dante's hypocrites conceal heavy lead on the inside (Inf. 23.64-6).

As Rabbi David Bendory asked the then-Mayor in an open letter:


Mr. Mayor, your citizen disarmament is an act of hypocrisy. Unlike nearly all the rest of us, everywhere you go you are surrounded by official armed guards, police escorts, and your highly trained personal private bodyguards. (See adjacent photo). Mr. Mayor, is your life worth more than the lives of your fellow citizens? Or are we mere “subjects” in your eyes?

Bloomberg is an evil hypocrite.  That's really all there is to it. 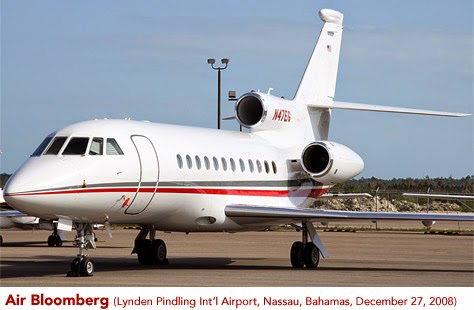 HE IS A CO2PHOBIC CLIMATE ALARMIST WHO FLIES IN HIS OWN JET AND HIS OWN HELICOPTER.

FREQUENTLY, TOO - AS IN EVERY WEEK HE WAS MAYOR.

AND HE VIOLATED CHOPPER NOISE CURTAILMENT CURFEW LAWS ALL THE TIME, TOO.

Posted by Punditarian at 5:50 AM