CNBC's Bob Pisani and Art Cashin, UBS, discuss the causes of today's monster sell-off. There is something here that's not weather related and perhaps more serious, Cashin says. U.S. stocks were hammered on Monday, with benchmark indexes falling through key support levels after a gauge of factory activity disappointed, heightening concern about the economy before Friday's monthly jobs report.

The crash is coming.

UPDATE: HAS THE GLOBAL SPIRAL BEGUN? TUESDAY IN ASIA:

Hong Kong stocks tumbled, with the benchmark index poised to cap a 10 percent fall from a December peak, after weaker-than-expected manufacturing growth from the U.S. to China fueled a global equities rout on concern about the strength of the global economy.

The Hang Seng Index declined 2.1 percent to 21,571.15 as of 9:30 a.m. in Hong Kong, heading for a five-month low, as it reopened after Chinese New Year holidays. The Hang Seng China Enterprises Index (HSCEI) of mainland Chinese companies, known as the H-share index, lost 3.1 percent to 9,512.22. China’s markets remain closed until Feb. 7.

Manufacturing gauges for the world’s two biggest economies are signaling a growth slowdown, which has combined with concerns about slumping emerging-market currencies to erase about $2 trillion from the value of equities worldwide. The H-share stock measure has tumbled 12 percent in 2014, more than any other primary equity index tracked by Bloomberg, while the Hang Seng Index (HSI) slid 7.6 percent.

Update 2:  HOW EMERGING MARKET CURRENCIES HAVE DONE THE LAST 12 MONTHS: 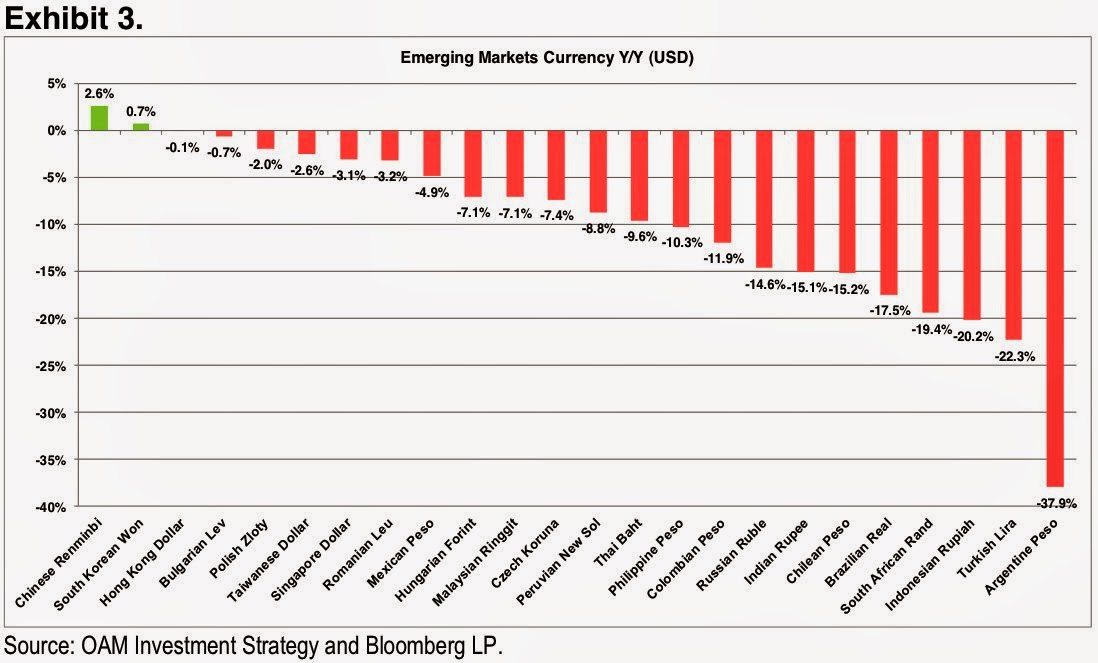 
A weaker-than-expected report on U.S. factory activity slammed global equity markets and the dollar on Monday, pushing Wall Street stocks down more than 2 per cent while keeping the pressure on battered emerging market assets. The benchmark S&P 500 index recorded its worst single-day drop in seven months, while the CBOE volatility index - Wall Street's so-called fear gauge - jumped 16.5 per cent to close at its highest level since December 2012.

Investment sentiment darkened after the Institute for Supply Management reported U.S. manufacturing activity slowed sharply in January on the back of the biggest drop in new orders in 33 years, while construction spending barely rose in December, suggesting the economy had lost some steam. The dollar fell to its lowest against the Japanese yen since late November, while the yield on the benchmark 10-year U.S. Treasury note fell to its lowest since early November.

Posted by Reliapundit at 8:49 PM