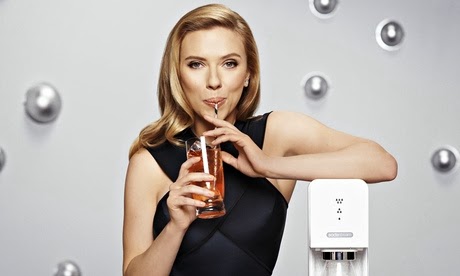 There's been rage among the anti-Israelists in the past week because actress Scarlett Johanssen was representing the Israeli Sodastream company, which has a factory in Mishor Adumim. A company which has been providing jobs to Arabs as much as Jews.

One of the bad sources that opposed her job was Oxfam, a British "charity" that she'd represented for free, and now, she's ideally cut ties with this bad movement. Sodastream will be bringing her here to visit Israel soon:


SodaStream plans to bring its global ambassador, Scarlett Johansson, to Israel this year, the company said on Thursday, the same day that the Hollywood star resigned from her prominent eight-year role as Oxfam’s representative due to the controversy over her new connection to a firm with a West Bank factory.

“She has never been to Israel before. We look forward to hosting her later in the year,” SodaStream president Yonah Lloyd told The Jerusalem Post, just three days before its ad featuring Johansson was to air at Sunday’s Super Bowl.

Since taking up her new post with SodaStream in December, grassroots pro-Palestinian groups, primarily the Boycott, Divestment and Sanctions movement, have attacked Johansson and called on Oxfam to drop her as its global ambassador. Alternatively, they asked her to stop representing SodaStream.

Johansson has defended SodaStream as a company where Israelis and Palestinians work together, and refused to cave to the public pressure to drop her new role.

Again, she's done the right thing, and what excuse does Oxfam and their ilk have for attacking a company that's providing Arabs with jobs I thought they believed they should get? Obviously, that was never what they wanted to start with, since they must believe Arabs should be poor for all the wrong reasons.
Posted by Avi Green at 4:21 PM