RAISING THE MINIMUM WAGE - ESPECIALLY FOR LOW-SKILLED ENTRY-LEVEL WORKERS IN FAST-FOOD - WILL INEVITABLY LEAD TO THIS:

AND THIS IS WHY:


McDonalds recently went on a hiring binge in the U.S., adding 62,000 employees to its roster. The hiring picture doesn't look quite so rosy for Europe, where the fast food chain is drafting 7,000 touch-screen kiosks to handle cashiering duties.

AND A ROBOT THAT CAN MAKE 360 BURGERS AN HOUR: 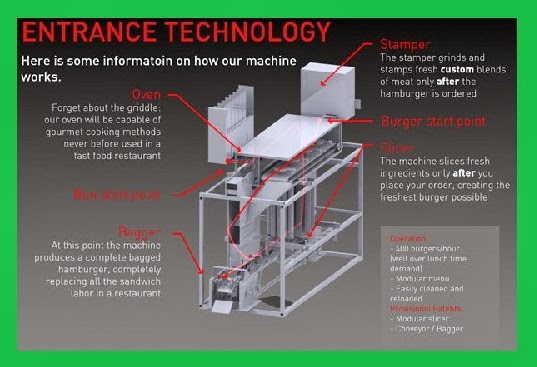 With a seemingly endless line of talking-heads willing to ignore essentially every study that has been undertaken with regard the effects of raising the minimum-wage, and propose what is merely populist vote-getting 'benefits' for the ever-increasing not-1% who benefited from Ben Bernanke's bubbles - we thought the following burger-flipping robot was a perfect example of unintended consequences for the fast food industry's workers.

With humans needing to take breaks, have at least 4 weekend days off per month, and demanding ever-increasing minimum-wage for a job that was never meant to provide a 'living-wage', Momentum Machines - a San Francisco-based robotics company has unveiled the 'Smart Restaurants' machine which is capable of making ~360 'customized' gourmet burgers per hour without the aid of a human.

Meet the Robot That Makes 360 Gourmet Burgers Per Hour

The San Francisco-based robotics company debuted its burger-preparing machine last year. It can whip up hundreds of burgers an hour, take custom orders, and it uses top-shelf ingredients for its inputs. Now Momentum is proposing a chain of ‘smart restaurants’ that eschew human cooks altogether.

THE POLITICIANS HARANGUING FOR A RAISE IN THE MINIMUM WAGE ARE WELL AWARE OF THESE FACTS.

THEY PUSH ON WITH THEIR DEMAGOGUERY ANYHOW, AS IT ENERGIZES THEIR BASE AND GETS THEM THE VOTES THEY NEED TO GET AND HOLD ON TO THE POWER THEY NEED TO LOOT THE COFFERS AND DOLE OUT THE LOOT TO THEIR MACHINE.

THESE LEFTIST DEMAGOGUES ARE EXPLOITING THE WORKING-CLASS MORE THAN THE EMPLOYERS!