Former Chancellor Helmut Kohl wanted to halve the number of Turks living in West Germany in the early 1980s, British official papers cited by a German magazine reveal. He discussed the idea with then UK PM Margaret Thatcher at a meeting in Bonn in 1982, Spiegel Online reported. Mr Kohl said that Turks "did not integrate well", minutes of the meeting said. He told Mrs Thatcher he wanted their numbers cut by half within four years.

Spiegel Online said the minutes were marked "secret" but have now been released as the period of confidentiality has ended."Chancellor Kohl said... that it would be necessary over the next four years to reduce the number of Turks by 50% - but he could not say that publicly," notes from the meeting said, according to the Spiegel Online report. 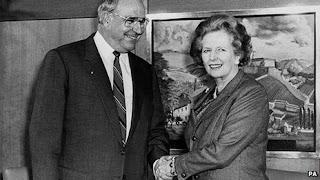 "Germany had no problems with the Portuguese, the Italians, even the south-east Asians, because these communities integrated well," the notes read. "But the Turks came from a very distinctive culture and did not integrate well." The author of the report was said to be Mrs Thatcher's then private secretary, AJ Coles.

Turkish migration to Germany stems from October 1961 when a labour recruitment agreement was signed between the two countries. Many so-called "guest workers" also came from Italy, Greece, Portugal, Tunisia and the then Yugoslavia. Mr Kohl, who was chancellor until 1998 and a leader of the conservative Christian Democrats (CDU), often spoke out against immigration during his time in office. However, numbers of immigrants continued to rise steadily.

KOHL WAS RIGHT AND WHAT HE SAID IS TRUE ABOUT MUSLIM IMMIGRATION INTO EUROPE SINCE THE 1970'S.

SADLY, NEITHER KOHL OR THATCHER ACTED THEN - AND NOTHING EFFECTIVE HAS BEEN DONE SINCE.

NOW, THE COLONIZATION OF EUROPE BY ISLAM IS SELF-PERPETUATING AND THE FACT THAT SO MANY MUSLIMS WITH NO INTENT OF ASSIMILATING - (AND WITH BIRTH RATES TRIPLE THAT OF NATIVE EUROPEANS) -  ARE CITIZENS OF THE EU VIRTUALLY CONDEMNS EUROPE TO A FUTURE OF SHARIA AND DARKNESS.

SADLY, THE LEFTIST PROGRAMS OF MULTICULTURALISM AND PC ARE PREVENTING THIS.

AND NOW, EVEN AS BRITISH SOLDIERS ARE BEHEADED IN LONDON IN DAYLIGHT, THE RULING CLASS FAILS TO ACT IN A WAY THAT MIGHT ENDURE CULTURAL SURVIVAL.

ONLY POLITICIANS LIKE GEERT WILDERS AND NIGEL FARAGE AND PAUL WESTON CAN SAVE EUROPE VIA DISMANTLING THE E.U. GOVERNMENT AND TAKING ACTIVE MEASURES TO DEFEND NATIVE CULTURES.

I DOUBT THIS WILL HAPPEN.

IF A BEHEADING IN LONDON DURING DAYLIGHT DOESN'T MOBILIZE A REBIRTH OF EUROPEAN PRIDE AND A WILLINGNESS TO DO WHAT MUST BE DONE, THEN WHAT WILL???????