Here's two page scans I found from the premiere issue of GI Joe back at the time Marvel Comics first published it in 1982, from a backup story in the book: 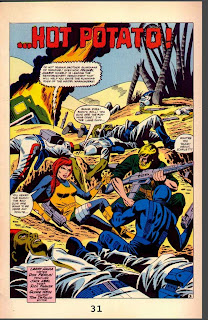 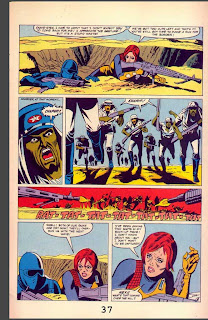 Scarlett and Snake Eyes are under siege by a gang of jihadists led by a Colonel Sharif (a battle cry the enemy soldiers let out with in the second panel before the heroes gun them away) who may or may not be allies of Cobra, and as heard on a radio in the first panel, the heroes are called "infidels". Very bold and gutsy when Larry Hama did it back then. And unfortunately, thanks to all the political correctness that's overtaken pop culture, it's not something you're bound to see in a mainstream company's comics today.
Posted by Avi Green at 7:32 AM