STUDY: SHAKESPEARE WAS A SURVIVALIST AND TEA PARTYING ANTI-GOVERNMENT NEOCON! 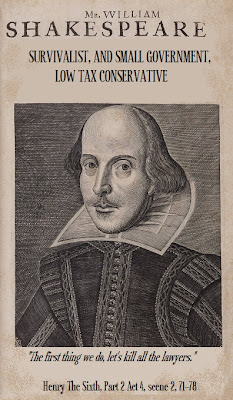 William Shakespeare's lesser known role as an illegal food hoarder 400 years ago helps us understand him as a more complex figure, says new research. As well as hoarding during food shortages, the Aberystwyth University study said the bard was also threatened with jail for tax evasion. They looked at how food and hunger were reflected in Shakespeare's writing. His play Coriolanus shows a famine created and exploited by rich merchants and politicians. It was written at the height of the 1607 food riots.

... When Shakespeare was writing, she said hunger and the way in which food was regulated by the government, and how it organised the food chain, was one of the most pressing political issues of the day. He was pursued by authorities for tax evasion, and in 1598 he was prosecuted for hoarding grain during a time of shortage.

HE WAS PROSECUTED FOR BEING AN ANT WHEN EVERYONE ELSE WAS A GRASSHOPPER.

AND HE DIDN'T LIKE TO PAY TAXES TO THE STATE'S CRONIES.

Posted by Reliapundit at 9:16 PM