PARALYMPIAN OSCAR PISTORIUS ARRESTED FOR SHOOTING HIS GIRLFRIEND TO DEATH 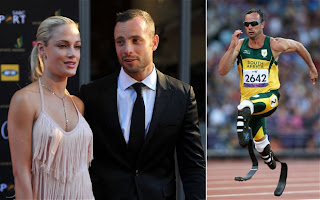 BBC: South African Paralympic athlete Oscar Pistorius is facing a murder charge after his girlfriend Reeva Steenkamp was shot dead at his home in Pretoria. Police said Mr Pistorius, 26, was at a local police station, adding that a friend of his was killed at his home. They confirmed a 26-year-old man would appear in court charged with murder later.

... The precise circumstances surrounding the incident are unclear. Some reports said that Mr Pistorius may have mistaken his girlfriend for an intruder. But police said they were "surprised" to hear reports that the deceased had been mistaken for a burglar.

They added that there had been previous incidents at the address and described them as "allegations of a domestic nature".

AWFUL. THE DOMESTIC VIOLENCE IN THAT HOME SHOULD HAVE NEVER BEEN IGNORED AS IT WAS.

(ASIDE: PISTORIUS APPARENTLY OWNED A LICENSED GUN - A DIFFICULT FEAT IN SOUTH AFRICA. THE GUN WAS JUST THE TOOL OF HIS EVIL INCLINATION. HE COULD HAVE USED A KNIFE OR HIS HANDS.)

Posted by Reliapundit at 7:47 AM

I hope we don't have to sit through another OJ trial with this guy.

It's 95% + this guy's guilty. It's not JUST a coincidence that the police had been REPEATEDLY called out to his home over "domestic incidents."

As evidence comes out (and there does not really need to be that much more for Occam's Razor) it will be shown this guy is guilty.

However, the fuck is going to present himself as the innocent Valentine's Day Casanova who got fraidy cat over an intruder.

Put him in a cell with OJ, quick.

so sad. she was gorgeous and smart.

if she had lived and married a sane smart man and had kids they might have sired a line of beautiful people who might've helped make the world a better place.

all those kids and grandkids and greatgrandkids were also murdered as and the great things they might've done are erased from our future.

He is being charged with Pre-Meditated Murder: