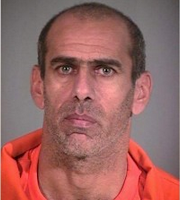 [Pictured at the left: Abdullatif Aldosary, arrested for detonating the IED on November 30, 2012]

The major mainstream media outlets continue to ignore whatever doesn't contribute to the agenda actively promoted by our so-called leaders. Thus far, only local media in Arizona have reported the name of the man arrested.

The typically quiet town of Casa Grande, Arizona, was rocked by an explosion at the local Social Security Administration office early Friday morning of what appears to an improvised explosive device (IED). No one was hurt in the explosion, which occurred shortly before the office was scheduled to open. The explosion was reportedly heard and felt all over the area.

While the little town of Casa Grande and the nearby Phoenix area are talking about the incident, virtually no one else is. In fact, the only reason I was following the story is because I’m presently in the area and saw the initial reports on the explosion and continued to look into it .

Within 90 minutes of the explosion, police had a suspect in custody. But you wouldn’t know it from reading the establishment media reports this past weekend. One reason might be that the suspect is 47-year-old Abdullatif Aldosary of Coolidge, AZ, an Iraqi refugee.

On Friday, federal agents served a search warrant on his home. Aldosary has been on the radar of the Department of Homeland Security for at least the past couple of years.

...[T]he FBI is saying very little and and will prosecute this as a simple explosives and arson case because of “the political sensitivities involved.”

With the people of Casa Grande and Phoenix abuzz about the information above, there is no way that the mainstream news media can be ignorant as to what happened and the name of the man arrested!  Aldosary is due to appear in federal court today.

I haven't been able to ascertain if Aldosary is a Muslim.  Not everyone with a Middle Eastern name is Muslim.  Nevertheless, it is probably that the mainstream media will not publish Aldosary's name because it is quite likely that he is indeed a Muslim.
Posted by Always On Watch at 5:46 AM