Like I Said, "America" Has Become Honey Boo Boo 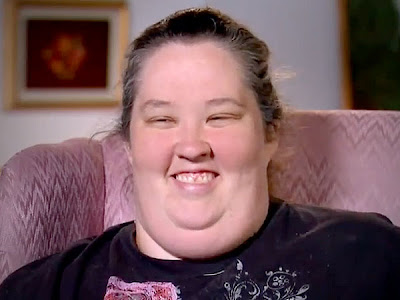 There is a rational explanation for the President’s reelection which doesn’t invoke a deep or complex meaning. The only way to explain the outcome is in the simplest and direct prose: the moochers prevailed.Obama’s winning tactic was to do what any respectable man does when he wishes to have something; he bought it. From cell phones and contraceptives to food stamps and unemployment benefits, the Obama administration kept the money flowing to ensure a steady turnout on Election Day. The coup de grâce was painting his opponent as a second coming of Dickens’ Scrooge that was ready to cut the voters from their trust funds.

The campaign made no attempt to hide this tactic. In an online video, celebrity Lena Dunham was tapped to extol the virtues of government-supplied birth control. The advertisement was aimed at a younger generation already guaranteed access to their parent’s health insurance till they turn 26 (and then morph simultaneously into full grown, self-sufficient adults).

The video was a great demonstration of the campaign strategy but it was topped by one woman from Cleveland, Ohio who exemplified the public trough mentality on camera. Commonly referred to as the Obama-phone lady, this woman was so enraptured by her “free” cell phone and other welfare entitlements, she was determined to “keep Obama in president” to use her exact words. Though clearly dimwitted, Ms. Obamaphone was a phenomenal orator of the President’s message of goodies in exchange for votes.

Though it worked splendidly, Obama’s strategy was not brilliantly crafted from the minds of experts. It was the same bread and circus routine employed by the Romans and applied to modern demographics that relish in a victim-like mentality. Women, the youth, blacks, Hispanics, and the elderly were all catered to through subtle patronization and outright payoffs.

Now, here's something I wrote a few months back:

Prenbendalism: America, Under Obama, Is Beginning To Look Like A Degenerate "Prebendialist" State Such as Nigeria


Richard A. Joseph, director of The Program of African Studies at Northwestern University, is usually credited with first using the term prebendalism to describe patron-client or neopatrimonialism in Nigeria.[1] Since then the term has commonly been used in scholarly literature and textbooks.

The Catholic Encyclopedia defines a prebend as the "right of member of chapter to his share in the revenues of a cathedral."[2]

Joseph used the term to describe the sense of entitlement that many people in Nigeria feel they have to the revenues of the Nigerian state. Elected officials, government workers, and members of the ethnic and religious groups to which they belong feel they have a right to a share of government revenues.

Joseph wrote in 1996, "According to the theory of prebendalism, state offices are regarded as prebends that can be appropriated by officeholders, who use them to generate material benefits for themselves and their constituents and kin groups..."[3]

As a result of that kind of patron-client or identity politics, Nigeria has regularly been one of the lowest ranked nations for political transparency by Transparency International in its Corruption Perceptions Index.[4]

Other results include the corruption investigations into the activities of 31 out of 36 Nigerian governors,[5] the frequent comments in the Nigerian press about the problems of corruption (for example, Victor E. Dike's article in the Daily Champion of Lagos, "Nigeria: Governance and Nigeria's Ailing Economy"[6]) and the common defenses of prebendalism as necessary for justice and equality in government funding (for example Oliver O. Mbamara's editorial, "In Defense of Nigeria: Amidst the Feasting of Critics" at Africa Events.[7]

A Prebendalist State is a primitive state in which tribes send representatives to loot the Central authority for a region. The region functions as a state, even when it lacks natural cohesion other than that being vaguely defined in the aftermath of Colonialist rule.

Prebendalism is acknowledged as being active in post-colonial states like those of Nigeria and India.

Obama's 1) Identity Politics,  2) his allegiance to Union cronies,  and 3) the vote-buying system he uses to push his agenda, have turned America into a Prebendalist State.

Given Obama's obsession with the evils of American Imperialism and "Colonialist" abuse, is it surprising that Obama's model for a working state is Africa?

It is possible, maybe even likely, that Obama sees minorities in America as being the victims of American Colonialism, just as much as Africans are.

Therefore, because Prebendalism is a means for such victims to obtain "Justice" thought payment of something very much like Reparations, Obama seems to be instituting exactly the same kind of system, as if by design.
Whether it is intentional or not, the course we taking, into African-style Prebendalism, is absolutely frightening.

And, here is what I wrote the day after the fucking "election" here in "America":

You know those polls where they ask the American Public "what is most important issue to you", and they say "The Economy"?!?

Well, I just figured something out.

If the Polling companies had added in a category for "Having My Own Reality TV Show So I Can Be Famous Just Like Honey Boo Boo", then that would have been the most important issue to the American Public this election season.

We might as well face it, we live in Idiocracy now.

We live in a country full of people who don't know what's in their own best self-interest.

They can't get a job, and that isn't the fault of the bad economy, stifled by socialist policies, no. That's not the problem to Honey Boo Boo.

The problem is, the Government won't give them a job.

If Obama wants to be popular the next four years, he ought to start a government program to make sure that every single American gets their own Reality TV Show on E! Television.

Cuz, your own Reality TV Show. That's a job, right? It's a job and you're famous. That's everything anyone could ever want.
That's some high-gear visionary Socialism.

Welcome to the Banana Republic of Barack Obama and Honey Boo Boo.

I HAVE BEEN EXACTLY RIGHT IN ALL THESE DESCRIPTIONS.

IN RETROSPECT, AS EVIDENCE COMES OUT, IT MAY BE THAT OBAMA STOLE THE ELECTION. BUT THAT DOES NOT REALLY MAKE MUCH OF A DIFFERENCE.

THE FACT IS, IF HE STOLE THE ELECTION WITH 400,000 VOTES IN FOUR STATES, ROMNEY STILL LOST THE POPULAR VOTE BY SEVERAL MILLION PEOPLE.

THAT IS PATHETIC, AND IT IS A TESTAMENT TO THE TRUTH OF ALL OF THE ABOVE.

I, FOR ONE, WILL NOT CONSOLE MYSELF WITH THE IDEA THAT VOTER FRAUD IS THE REASON THAT OBAMA IS OUR PRESIDENT. OBAMA IS SUCH A BAD PRESIDENT, HE IS SO OUTSIDE THE AMERICAN TRADITION; HE IS SO MALEVOLENT, AND STANDS IN SUCH OPPOSITION TO OUR CONSTITUTION, THAT IT OUGHT NOT HAVE BEEN CLOSE.

I AM AFRAID OF MY FELLOW CITIZENS HERE IN "AMERICA". I NO LONGER TRUST THEM.

The Voters of "America" Have Decided on Bronco Bama

WATCH THE VIDEO BELOW, and just for knowin', "Chickadee" ain't married.

Of course not, right?

Posted by Pastorius at 5:21 PM

WHAT OUGHT TO HAVE HAPPENED IS ONE THING. AND WHAT HAPPENED DUE TO FRAUD IS ANOTHER.

WHY BLAME DUPES - BRAINWASHED BY THE MSM AND THE ACADEMY - FOR VOTING FOR THIEVES?

WHAT DO YOU EXPECT PEOPLE TO DO IF THEY ARE NOT IN POSSESSION OF THE TRUTH?

YOU ARE A CHRISTIAN.

DO YOU EXPECT PEOPLE TO TURN TO JESUS IF THEY HAVE NEVER HEARD THE GOSPEL?

SO WHY EXPECT THE NON-POLITICALLY INCLINED PEOPLE WHO RELY ON THEIR TEACHERS AND THE MSM TO DOUBT THEM AND VOTE GOP?

THE LECTION PROVRES THAT 50% OF THE VOTERS ARE DEMOCRAT LEANING AND 50% ARE GOP LEANING.

AND YET, MOST COLLEGE CAMPUSES AND PUBLIC HIGH SCHOOLS AND TV STATIONS AND MAGAZINES AND TALK SHOWS AND MOVIES ARE OVERWHELMINGLY DEMOCRAT AND LEFT-LEANING.

THIS IS WHY AND HOW THE LEFT WINS.

WE NEED TO DEMOLISH THE STRANGLEHOLD THE LEFT HAS ON THE ACADEMY AND THE MEDIA.

AS BREITBART AND DAVID HOROWITZ HAVE LONG ARGUED.

WE MUSTN'T GIVE UP.

WE CAN YET DEFEAT THE AXIS THAT PUT HIM IN A POSITION TO BE ABLE TO STEAL THE ELECTION.

I'm not giving up. My strategy is just different than yours.

And, actually, in my opinion, when it gets to this point, PEOPLE ARE WITHOUT EXCUSE:

18 The wrath of God is being revealed from heaven against all the godlessness and wickedness of people, who suppress the truth by their wickedness, 19 since what may be known about God is plain to them, because God has made it plain to them. 20 For since the creation of the world God’s invisible qualities—his eternal power and divine nature—have been clearly seen, being understood from what has been made, so that people are without excuse.

21 For although they knew God, they neither glorified him as God nor gave thanks to him, but their thinking became futile and their foolish hearts were darkened. 22 Although they claimed to be wise, they became fools 23 and exchanged the glory of the immortal God for images made to look like a mortal human being and birds and animals and reptiles.

24 Therefore God gave them over in the sinful desires of their hearts to sexual impurity for the degrading of their bodies with one another. 25 They exchanged the truth about God for a lie, and worshiped and served created things rather than the Creator—who is forever praised. Amen.

26 Because of this, God gave them over to shameful lusts. Even their women exchanged natural sexual relations for unnatural ones. 27 In the same way the men also abandoned natural relations with women and were inflamed with lust for one another. Men committed shameful acts with other men, and received in themselves the due penalty for their error.

28 Furthermore, just as they did not think it worthwhile to retain the knowledge of God, so God gave them over to a depraved mind, so that they do what ought not to be done. 29 They have become filled with every kind of wickedness, evil, greed and depravity. They are full of envy, murder, strife, deceit and malice. They are gossips, 30 slanderers, God-haters, insolent, arrogant and boastful; they invent ways of doing evil; they disobey their parents; 31 they have no understanding, no fidelity, no love, no mercy. 32 Although they know God’s righteous decree that those who do such things deserve death, they not only continue to do these very things but also approve of those who practice them.

Another thing, when people keep telling me over and over that I am their enemy, I start to believe them.

some on the left are our enemy.

some are just dupes.

we must distinguish between the evil lying scum like axelrod and obama and their henchmen and the millions of americans who do not know better.

you want to attack the people who are brainwashed.

They have to decide. I am not responsible to hold their hands any more.

They made their decision.

The choice is clear.

They are without excuse.

I think there is only so much handholding each of us can do in life. Some people's mission is to hold people's hands their whole life.

I am absolutely fed up with the humans who surround me.

On an individual basis, I will be kind. But, as a group, they are my enemy. They told me. They chose this. Not me.

You know, Occupy is now feeding people just like Hizbollah.

And people are believing that Occupy cares.

And Christians are capos.

opening people's eyes is not hand-holding.

think of yourself as a missionary.


are missionaries disgusted by the pagans they seek to convert?

maybe, but they don;t curse them and walk away.

I get what you're saying.

You're making a good point.

But, I really can not get past the fact that these people are enemies of our Constitution.