The Arab Lawyers Union [ALU] on Friday honored the Palestinian woman who carried out the 2003 suicide bombing at Maxim's Restaurant in Haifa by awarding her the highest decoration to ever be granted by the union. Twenty-one people were killed and 51 injured in the attack, which was carried out by Hanadi Jaradat, a law student from Jenin who was due to qualify as a lawyer in a few weeks.

She was the sixth female suicide bomber during the second intifida.
The Cairo-based union, which represents lawyers from 15 Arab countries, dispatched a delegation to the home of Hanadi Jaradat in Jenin to present them with the award.

THESE ARE A FEW OF HER VICTIMS:

THIS IS ONE OF THE MANY GRAPHIC IMAGES TAKEN AFTER THE BODIES WERE CLEARED FROM THE SCENE OF THE ATTACK: 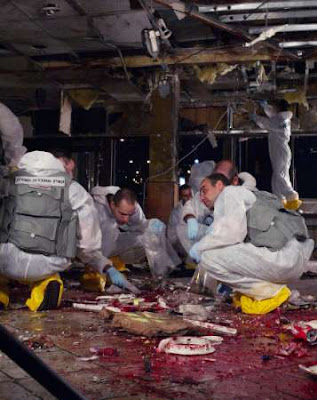 THIS PROVES THAT ARABS - EVEN SOMEWHAT EDUCATED ONES -   ARE MOSTLY SAVAGES AND PROVES THAT MANY OF THE ARABS WHO AREN'T SAVAGES THEMSELVES SUPPORT THE SAVAGERY OF THE SAVAGES.
Posted by Reliapundit at 2:46 PM