HUGE BREAKING NEWS: OMFG: OBAMA LIED AND CROWLEY SWORE TO IT: OBAMA DID NOT UTTER THE WORD TERROR AT THE ROSE GARDEN SPEECH! UPDATED - SCROLL DOWN! 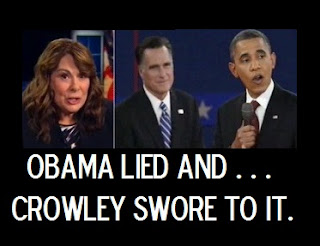 HERE'S HIS OFFICIAL STATEMENT FROM THE WHITE HOUSE WEBSITE: 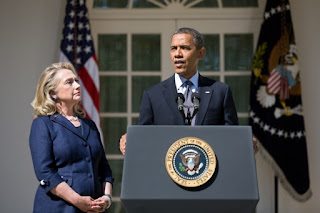 I strongly condemn the outrageous attack on our diplomatic facility in Benghazi, which took the lives of four Americans, including Ambassador Chris Stevens. Right now, the American people have the families of those we lost in our thoughts and prayers. They exemplified America's commitment to freedom, justice, and partnership with nations and people around the globe, and stand in stark contrast to those who callously took their lives.

I have directed my Administration to provide all necessary resources to support the security of our personnel in Libya, and to increase security at our diplomatic posts around the globe. While the United States rejects efforts to denigrate the religious beliefs of others, we must all unequivocally oppose the kind of senseless violence that took the lives of these public servants.

On a personal note, Chris was a courageous and exemplary representative of the United States. Throughout the Libyan revolution, he selflessly served our country and the Libyan people at our mission in Benghazi. As Ambassador in Tripoli, he has supported Libya's transition to democracy.

His legacy will endure wherever human beings reach for liberty and justice. I am profoundly grateful for his service to my Administration, and deeply saddened by this loss.The brave Americans we lost represent the extraordinary service and sacrifices that our civilians make every day around the globe. As we stand united with their families, let us now redouble our own efforts to carry their work forward.

OBAMA SAID AT THE DEBATE, THAT HE "CALLED THE ATTACK ON BENGHAZI AN ACT OF TERROR THE DAY AFTER THE ATTACK DURING HIS STATEMENT IN THE ROSE GARDEN" AND THE TRUTH IS HE MOST CERTAINLY DID NOT.

SO OBAMA LIED IN THE DEBATE - AND CROWLEY SWORE TO IT!


IF OBAMA DIDN'T LIE THEN HE'D HAVE NOT A FREAKIN. THING TO SAY.
REPEAT: ROMNEY WAS RIGHT ON THE FACTS AND OBAMA WRONG. OBAMA LIED TONIGHT.
ROMNEY WAS RIGHT.
AND MORE IMPORTANTLY, OBAMA MISHANDLED THE ENTIRE BENGHAZI AFFAIR - AND MIDDLE EAST POLICIES.


Obama said during the speech that “No acts of terror will ever shake the resolve of this great nation” — but at no point was it clear that he was using that term to describe the attack in Benghazi.

HE COULD HAVE, BUT CHOSE NOT TO.

UPDATE #6: GERAGHTY PROVES OBAMA TIED THE ATTACK TO THE MOHAMED MOVIE IN HIS REMARKS IN THE ROSE GARDEN:


Take a look at Obama’s Rose Garden comments here. Obama refers to the murder of Stevens and the other Americans as an “attack” – duh – but then he says:

"Since our founding, the United States has been a nation that respects all faiths.  We reject all efforts to denigrate the religious beliefs of others.  But there is absolutely no justification to this type of senseless violence.  None."

Those lines clearly imply that the events were a reaction to the YouTube tape. The word “terror” appears once, in the entirety of Obama’s remarks, in this context:

"No acts of terror will ever shake the resolve of this great nation, alter that character, or eclipse the light of the values that we stand for.  Today we mourn four more Americans who represent the very best of the United States of America."

That’s not specifically referring to the Benghazi raid, although one could argue it’s implied.

However, by telling the audience – to applause! – that Obama did refer to the murders as a terror attack, Candy Crowley is responsible for one of the most egregious misjudgments of any moderator in the history of presidential debates.

IN THE VIDEO, OBAMA SPECIFICALLY REFERS TO THE PERPS AS "KILLERS" AND NOT AS TERRORISTS.

WATCH THE SPEECH HERE.  HE SAYS No acts of terror will ever shake the resolve of this great nation” AT 5:54 INTO THE VIDEO.

UPDATE #3: HOFT HAS VIDEO OF KRAUTHAMMER.


CNN anchor and debate moderator Candy Crowley joined CNN’s panel after the debate to discuss a moment where she corrected Mitt Romney after he claimed that President Barack Obama had refused to characterize the attack in Libya an act of terror for 14 days. Crowley said that Romney’s was “right” in that the Obama administration spent weeks refusing to say that the attack was terrorism, but she thought at the time that “he picked the wrong word.”

“I heard the president speak at the time. I, sort of, reread a lot of stuff about Libya because I knew we’d probably get a Libya question so I kind of wanted to be up on it,” said Crowley. “I knew that the president had said, you know, these acts of terror won’t stand. Or, whatever the whole quote was.”

“Right after that I did turn around and say, but you’re totally correct that they spent two weeks telling us this was about a tape and that that there was this riot outside the Benghazi consulate which there wasn’t,” Crowley added.

“He was right in the main, I just think he picked the wrong word,” Crowley concluded. She went on to say that her instinct forced her to correct Romney even though his “thrust” was correct.

SO WHY DID SHE INTERFERE AND COME TO OBAMA'S DEFENSE?

WAS SHE MERELY MOMENTARILY IN OBAMA'S THRALL?

OR DID HER DEEP SYMPATHIES TO OBAMA AND THE LEFT GAIN CONTROL OVER HER CAPACITY TO THINK?

I think he did, though it was not clear he was referring to the attack on the embassy specifically:

No acts of terror will ever shake the resolve of this great nation, alter that character, or eclipse the light of the values that we stand for. Today we mourn four more Americans who represent the very best of the United States of America. We will not waver in our commitment to see that justice is done for this terrible act. And make no mistake, justice will be done.

there are TWO DIFFERENT TRANSCRIPTS

WHAT'S UP WITH THAT?

THERE WAS ONE ROSE GARDEN SPEECH.

WHEN HE SAID - IN THAT VERSION:

No acts of terror will ever shake the resolve of this great nation, alter that character, or eclipse the light of the values that we stand for.

IT'S OBVIOUS THAT IN THAT VERSION HE WAS REFERRING TO ATTACKS IN GENERAL.

Obama said during the speech that “No acts of terror will ever shake the resolve of this great nation” — but at no point was it clear that he was using that term to describe the attack in Benghazi.

HE REFERS TO THE PERPS AS "KILLERS" AND NOT TERRORIST IN THE SPEECH:

OBAMA SAID "NO ACTS OF TERROR"

HE WAS SPEAKING IN A GENERAL PRESCRIPTIVE WAY AND NOT REFERRING TO BENGHAZI.

Do you have any theory as to why there are two transcripts?

I got you linked up Ann, including your post from Instapundit: 'Candy Crowley Shills for Obama at Hofstra Debate!'

There's video at that link.

Linked at my site.

“Declaring something an act of terror does not necessarily mean you are declaring it a terror attack.” —Fox News’ Megyn Kelly