No stadium; no balloons!? Here's a suggestion:

At almost the last minute, the Democrats have canceled Thursday night's big football stadium event featuring President Barack Obama's re-nomination acceptance speech. Bad weather forecast, they say. Going indoors to the nearby basketball/hockey arena. But the ceiling there is filled with exactly none of the thousands of red, white and blue balloons that TV viewers expect to be dropping as a convention finale.

Will the party move heaven and earth — and beseech hundreds of party decoration stores around the Southeast — to get some balloons ready? Nope. No balloons. Party officials say they're thinking about some other suitably celebratory finish.

CBS REPORTED ON THE LACK OF A BALLOON DROP HERE. 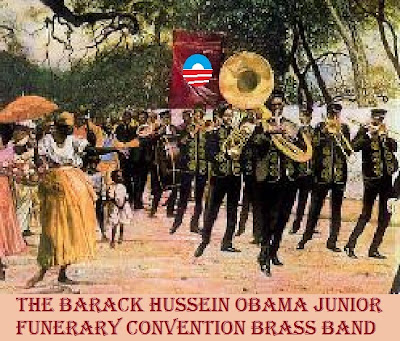 THEY CAN HAVE A NEW ORLEANS STYLE BRASS BAND PLAY THEM OUT THEY WAY THEY PLAY OUT A RECENTLY DECEASED PERSON.

IT WOULD BE APT!

Posted by Reliapundit at 5:03 PM