MOST EXPENSIVE HOME IN BRITAIN BELONGED TO... ARABS, AND IT'S FOR SALE 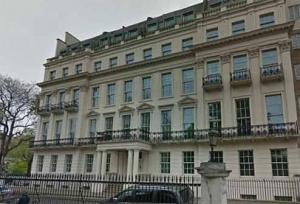 If it meets its asking price the seven-storey, 45-bedroom home would more than double the previous British house price record of £140 million, the Financial Times said.

The 60,000-square-foot property includes a large swimming pool, underground parking and several lifts, and is thought to have had its windows bullet-proofed by Hariri, who owned the house until he was assassinated in Beirut in 2005. It was then given to Hariri's business associate Sultan bin Abdulaziz, crown prince of Saudi Arabia, the report said. Abdulaziz died in October.

POST WW2, THE WEST MADE ARABS RICH AND GAVE THEM THEIR OWN COUNTRIES.

WHAT HAVE THE ARABS BUILT SINCE THEN?

WHAT MADE THIS SO?

ISLAM 0 IT'S THE HE FOUNDATION OF THEIR CULTURE.

THE MORE MODERN AND FREE AND PLURALISTIC A MAJORITY-MUSLIM NATION IS, THE LESS ISLAMIST IT IS.

UNFORTUNATELY, THE ISLAMIC NATIONS ARE MOVING AWAY FROM PLURALISM AND MODERNITY.

THROWN OUT OF EVERY GLOBAL INTERNATIONAL ORGANIZATION - INCLUDING THE UN, THE WORLD BANK, THE IMF, AND THE WTO -  AND CUT OFF FROM ALL TRADE AND FINANCING AND CULTURAL EXCHANGE.

THERE'S JUST NOT ENOUGH MONEY OR A LARGE ENOUGH MILITARY OR STRONG ENOUGH WILL WITHIN THE WEST TO DO TO ISLAMISM WHAT WE DID TO THE SLAVE TRADE.

AND NOT EVER - UNLESS AND UNTIL THE UNLEASH WMD'S ON US, I GUESS...

SIGH.
Posted by Reliapundit at 8:03 AM

Interesting you came to the same conclusion as I: If the West is unwilling to win total victory on the battlefield then a new Cold War based on Containment of Islamism is the only viable choice.

contain them and let them kill each other --- a self-cleaning oven....