HMMMMM: DID THE ENEMY TRADE OSAMA FOR MUBARAK?

“What if Ayman al-Zawahiri and other Al Qaeda leaders gave up Osama bin Laden for the express purpose of making Obama look good?” the conservative radio host said, according to audio posted by Mediaite. “Giving Obama stature, political capital?”

Limbaugh, admitting he had a “wild theory” and was “just thinking off the top of my head,” said bin Laden — the founder of Al Qaeda, its leader for more than two decades and a major funder of its operations until he was killed by Navy SEALs in 2011 — was “expendable.”

“Al Qaeda was not depending on Osama bin Laden for operational leadership,” Limbaugh said. “His day had come and gone.”

Limbaugh said the terrorist group would rather have Obama in power to help them get “what they want more than anything in the world” — the destruction of Israel.

“Let me put it to you this way,” he said. “Do you think that militant Islamists will be as hopeful of getting rid of Israel with a Republican president or with a Democrat president?”

MAYBE IT WAS ... THE MUSLIM BROTHERHOOD? 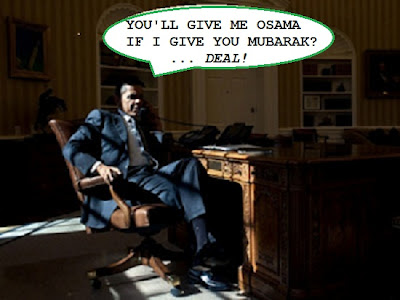 IT WOULD HAVE BEEN EASIER FOR OBAMA AND HIS PRO-BROTHERHOOD PEOPLE TO WORK OUT A BACK-CHANNEL DEAL WITH THE MUSLIM BROTHERHOOD THAN AL QAEDA.

(AND THE DOCTOR IN PAKISTAN WAS IN ON THE DEAL - HIS ARREST IS A COVER.)

IT EXPLAINS WHY OBAMA MADE MUBARAK INTO THE ARCH-PARIAH - BUT HAS NOT DONE THE SAME TO AHMADINEJAD OR ASSAD - WHO HAVE EACH KILLED AND JAILED MORE OF THEIR OWN CITIZENS THAT MUBARAK.

SOMETHING TO THINK ABOUT. ANYWAY... ESPECIALLY SINCE OBAMA DID EXPLICITLY AND OVERTLY HELP THE MUSLIM BROTHERHOOD IN 2009.
Posted by Reliapundit at 10:30 PM