Suspected Islamist militants attacked an air force base in central Pakistan early on Thursday, the air force said, in a brazen challenge to the country's powerful military. Air force commandos were exchanging gunfire with what an air force statement called "terrorists", hours after the attackers entered Minhas base in the town of Kamra in Punjab province.

"Terrorists" is the term Pakistani authorities use to describe militant groups such as the Taliban. The overnight assault challenged official assertions that Pakistan's military had severely weakened militants waging a violent campaign to topple the U.S.-backed government and impose strict Islamic rule.

WERE THEY LOOKING FOR A NUKE? STAY TUNED... 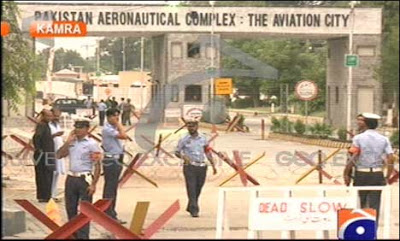 
According to PAF spokesman, the militants stormed into PAF Base Minhas and in a two-way clash five to six militants were killed while one body of a suicide bomber strapped with explosives has been found close to the impact area.


In May 2011, it took security forces 17 hours to quell a similar attack on an air base in the southern city of Karachi that killed 10 security personnel and destroyed two US-made aircraft, and was claimed by the Taliban.

The military in Kamra, in the central province of Punjab, has been targeted at least twice in recent years.


Suspected Islamist militants attacked a major Pakistani Air Force base where some of the country’s nuclear weapons are thought to be stored in the early hours of Thursday, setting off an exchange of fire that lasted several hours.

THE ISLAMISTS WERE PROBABLY FYER THE NUKES.

Posted by Reliapundit at 9:35 PM