THE FRENCH GOVERNMENT HAS BEEN FIGHTING FOR A YEAR TO PROP UP GREECE BECAUSE FRENCH BANKS OWN A SHITLOAD OF GREEK DEBT.

NOW, THE NEW SOCIALIST GOVERNMENT OF FRANCE IS ABOUT TO DESTROY THE FRENCH REAL ESTATE MARKET AND THE BANKS ALONG WITH THEM - BY RAISING REAL ESTATE TAXES:


Approximately 200,000 Britons own second homes in areas such as the Dordogne and other parts of France, particularly those serviced by budget airlines.

Now, however, holiday home owners find themselves in the sights of President François Hollande as he seeks to tax the better-off to reduce France's large budget deficit. 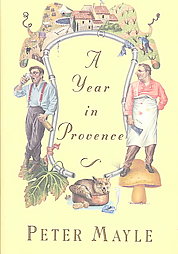 BRITS LOVE THEIR 2ND HOMES IN FRANCE - FAMOUSLY DESCRIBED IN THE GREAT MEMOIR, A YEAR IN PROVENCE.

THERE WILL BE A STAMPEDE FOR THE EXITS  - FIRST IN 2ND HOMES AND THEN PRIMARY RESIDENCES AS THE HOUSE OF CARDS COLLAPSES.

(Buy the Mayle book here.)
Posted by Reliapundit at 8:36 PM