The NYTIMES lost another $88 million this quarter.

Do they wonder why?
It's because they promote a Gramscian agenda that may be in tune with the chic degenerati who work at the NYTIMES  - and the few who still read it, but not the overwhelming majority of people who live in the USA.
EXAMPLE FROM TODAY'S PAPER a big article celebrating a transgender "exhibition" with a slide show (excerpt):

DREA EBONY was clearly feeling it. Who wouldn’t marvel at the way she flipped her hair in a circle and kicked her leg out like a Rockette as she sauntered up and down that runway in her shiny gold pants and white tank top, as cheers from the crowd grew louder and louder.
Time and time again, young kids on the transgender spectrum had graced stages almost identical to this one and been sent packing. But Drea Ebony, 18 and visiting from Pittsburgh, was different. She was a star. And she was going to prove it.
With the lights dimmed and the music blaring, Ms. Ebony flipped back in a handspring-like maneuver that ended with her landing on her back like a breakdancer. She then sprang back up, striking a pose or two or three.
“Ten. Ten. Ten. Ten. Tens across the board,” the M.C. Dashaun Wesley boomed as judges held up their scores.
Moments later, Ms. Ebony had her trophy in hand, the victor in the category of Female Figure Vogue, beating a host of other contestants from houses like LaBeija, Mugler and Evisu. “I’ve never been at an event this big,” Ms. Ebony said. “I think this is definitely the biggest one.”
Back in the 1980s, voguing and drag balls flourished in gay New York, with a brief surge in the early ’90s brought on by Madonna, Malcolm McLaren and the film “Paris Is Burning,” which chronicled the lives of several of the subculture’s most colorful inhabitants. But first came AIDS and then came hedge funds. And so the scene receded to the shadows, returning to smaller venues in Harlem and the South Bronx.
But then last month, e-mail began circulating with the news that the Xtravas (as they are known in drag ball parlance) were bringing the party to XL, a slicker-than-vinyl gay club near Times Square, in an attempt to widen the audience again.
And judging by the turnout last Sunday at the House of Xtravaganza’s 30th anniversary celebration, the effort has worked.

IT'S CLEAR WHOSE SIDE THE NYTIMES IS ON - AND IT'S NOT THE SIDE OF NORMAL PEOPLE.
IT'S THE SIDE THAT SAYS THERE IS NO SUCH THING AS NORMAL AND THAT DEVIANCY IS FINE.
IT'S THE POSTMODERNIST SIDE - AND THAT'S WHAT IS HURTING THE NYTIMES PROFITS AND RUINING OUR CIVILIZATION FROM THE INSIDE.

THAT STORY WAS YESTERDAY'S NEWS.

TODAY, THEY ATTACKED NORMALCY AND THE WEST AGAIN - WITH A FRONT PAGE STORY AND A BIG SLIDE SHOW: 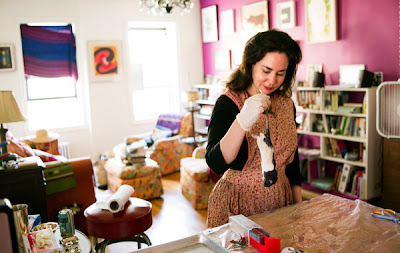 AT first glance the opening and dinner at the Allegra LaViola Gallery on the Lower East Side on Wednesday night looked like any other New York art event. There were stylish people from Brooklyn and Manhattan, in dark clothing and notable shoes. Photographs lined the walls. Thematically appropriate mood music — in this case, live drums — came from a corner of the gallery. Laura Ginn, the artist being celebrated, wore a one-shoulder, one-of-a-kind dress.

There was a bit of a stench coming off it, though. Ms. Ginn’s gown was made of rat pelts, 300 of them, that she had tanned and sewn together. Their tails encircled her abdomen; two rat faces met on her right shoulder. “I thought that was cute,” she said, and laughed. “They’re kind of kissing. I do anthropomorphize them sometimes.”

Ms. Ginn, 28, has made working with animals her métier since she graduated with an M.F.A. in photography from Cranbrook Academy in Michigan in 2010.

...Twenty people, mostly friends of Ms. Ginn or the gallery owner, Ms. LaViola, nibbled on goat cheese bruschetta topped with rat leg tenderloin, and rat-pork terrine encircled with beef fat, prepared by a chef after much trial and error with his proteins.

The rats were shipped from a United States Department of Agriculture-approved West Coast processor that supplies pet owners with humanely killed, individually flash-frozen rodents, in classifications ranging from “jumbo” to “fuzzy.” 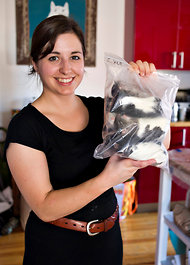 Seventy five rats were skinned and cooked — and broiled and smoked and grilled — for the dinner, and most guests paid $100 each to attend, signing a liability waiver, some not entirely willingly.

THEY WERE SERVED ON OLD GLORY: 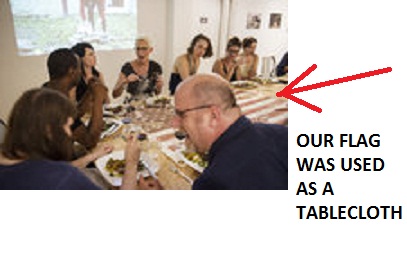 CHECK OUT THE SLIDE SHOW.


AND THE NYTIMES CELEBRATES IT.

AND THAT'S WHY THEY LOSE MILLIONS.

AND DEFINING DEVIANCY DOWN IS WHY OUR CULTURE IS DECLINING.

THAT'S WHAT THE POSTMODERN LEFT WANTS.

IT'S THE CULTURE WAR:


WHOSE SIDE ARE YOU ON?
Posted by Reliapundit at 8:38 PM